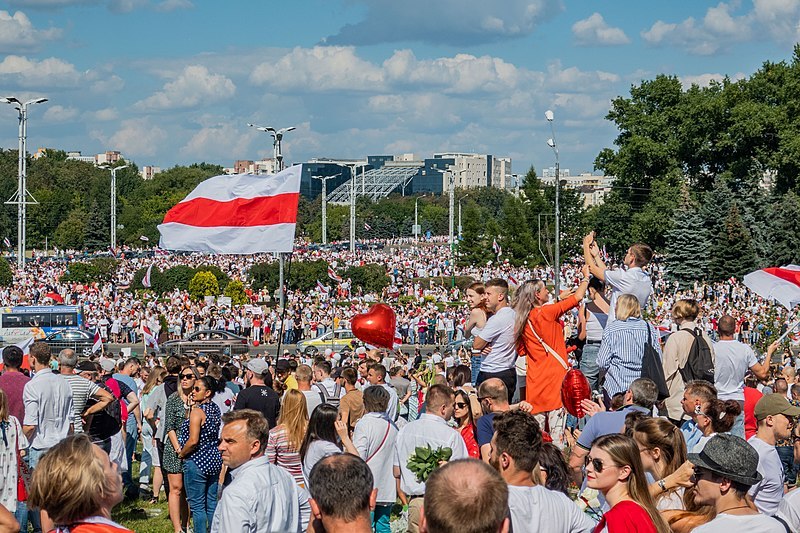 Minsk/Sputnik: At least 10 people were arrested during a protest rally in Minsk's northeast near the Kamarouski Rynak marketplace, a Sputnik correspondent reported on Saturday.

Yet another so-called women's march, the signature feature of post-electoral protests in Belarus, began in Minsk earlier in the day. Protesters initially planned to rally in the city center near the Victory Square, but re-located to Kamarouski Rynak after the square was shut down an hour before the scheduled start of the protest.

The updated arrangements were translated to people via pro-protests Telegram channels.
First participants gathered at the marketplace at around 2 p.m. Minsk time (11:00 GMT). Almost immediately, law enforcement officers arrived in vans and began conducting arrests. Their arrival prompted the protesting women to dissociate. Police vans then moved to the Victory Square and arrested several people there.

Shortly later, protesters began marching back toward the city center, chanting what can be translated from the Belarusian as "We are coming!" Halfway to the square, they were approached by the nearby parked police vans and around 10 people were arrested.

Officers were confiscating cellphones of the arrested protesters when placing them in the vans.
As the remaining part of the rally continued to march across the city center toward the Belarusian National Technical University, security vehicles returned and officers continued to conduct more arrests.

People have been protesting in Belarus for over a month now, dismayed by the official results of the August 9 presidential election that catapulted incumbent President Alexander Lukashenko to a sixth consecutive term.

Police cracked down on protesters during the first several days of the unrest. More than 6,700 people were detained during the initial phase of the protest. According to the Belarusian Interior Ministry, three people died and several hundred others sustained injuries during that period, including more than 130 security officers.

This past Wednesday, Lukashenko held a clandestine inauguration ceremony. When it became known to public, protests escalated and security forces used force to disperse the rallies.