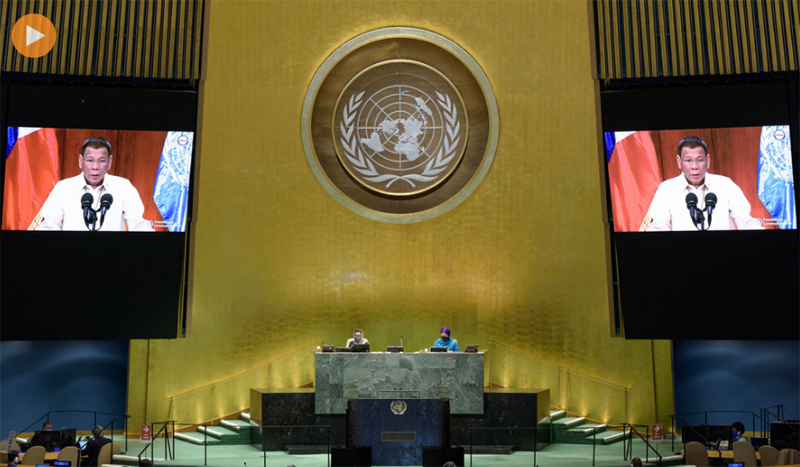 New York: While every country has its own strategy to fight coronavirus, the world needs coordinated international efforts and a common purpose to end the crisis, the President of the Philippines said on Tuesday, underlining the importance of universal access to anti-COVID-19 technologies in the recovery from global pandemic.

In an address to world leaders gathered at the UN General Assembly’s annual debate, President Rodrigo Roa Duterte called for access to a vaccine against the virus, once found, must not be denied nor withheld.

“It should be made available to all, rich and poor nations alike, as a matter of policy.”

President Duterte also called for a “global” health agenda with sufficient resources and policy space for the World Health Organization (WHO). The UN health agency should be “quick to coordinate and quicker to respond,” he added, noting that the Philippines will “to do its part.”

In his address, the President also affirmed his country’s commitment to the Sustainable Development Goals (SDGs) and the Paris Agreement on climate change.

Citing the impact of the coronavirus on Filipino migrant workers, many of who lost not only their livelihoods but also their lives, and yet “go on in the frontlines, healing, caring for others in the different parts of the world,” President Duterte called promoting and protecting the rights of migrants, regardless of their migrant status.

“We must all adhere to the Global Compact for Safe, Orderly and Regular Migration. Unless states include all migrants in their response to this pandemic,” he said.

The President of the Philippines also stressed that his country will continue to protect its people from the illegal drugs, criminality, and terrorism, denouncing interest groups that have “weaponized” human rights and attempt to discredit the popularly elected Government that continues to enjoy widespread approval and support.

“These detractors pass themselves off as human rights advocates while preying on the most vulnerable humans; even using children as soldiers or human shields in encounters … they hide their misdeeds under the blanket of human rights but the blood oozes through,” Mr. Duterte said, adding that to move forward, open dialogue and constructive engagement with the UN is the key.

“But these must be done in full respect of the principles of objectivity, non-interference, non-selectivity and genuine dialogue. These are the fundamental bases for productive international cooperation on human rights,” he said.

The leader of the Philippines also cautioned against rising geo-political tensions and new flashpoints, heightening fears and tearing people apart.

“I therefore call on the stakeholders in the South China Sea, the Korean Peninsula, the Middle East and Africa: if we cannot be friends as yet, then in God’s name, let us not hate each other too much,” the President said.