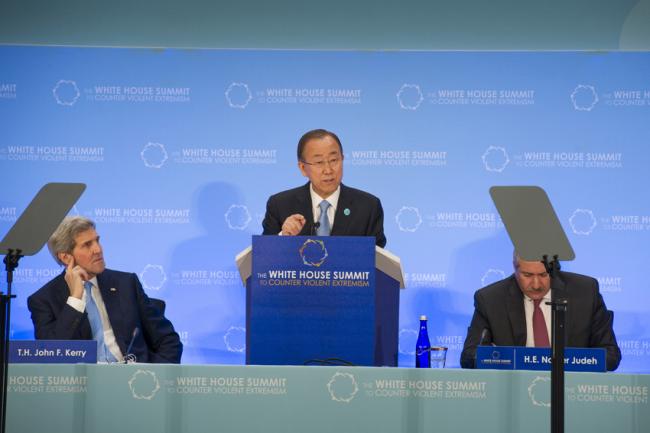 He also spoke against giving into fear, as he called for “cool heads and common sense” to deal with what may very well be “the greatest test our human family faces in the 21st century.”

“Let there be no doubt,” Ban proclaimed to a room full of high-level delegates including US secretary of state John Kerry.

He added, “The emergence of a new generation of transnational terrorist groups including Da’esh (or the Islamic State of Iraq and the Levant) and Boko Haram is a grave threat to international peace and security.”

Among those joining Ban on the panel of the White House Summit on ‘Countering Violent Extremism’ were US deputy national security adviser, Tony Blinken, deputy director of the US National Counter-terrorism Center and Nicholas Rasmussen.

In his address, the Secretary-General said no cause or grievance can justify the “unspeakable horrors” that terrorist groups are carrying out against innocent people, the majority of whom are Muslim. Women and girls, he added, are particularly subject to systemic abuses, rape, kidnapping, forced marriage and sexual slavery.

“These extremists are pursuing a deliberate strategy of shock and awe, beheadings, burnings, and snuff films designed to polarize and terrorize, and provoke and divide us,” the UN chief added, commending UN Member States for their political will to defeat terrorist groups and at the same time, urging them to stay “mindful of the pitfalls.”

“Many years of our experience have proven that short-sighted policies, failed leadership and an utter disregard for human dignity and human rights have causes tremendous frustration and anger on the part of people who we serve,” the UN chief said.

He outlined what he called four imperatives to deal with violent extremism. First, the world must look for motivations behind such ideologies and conflict. While this has proven over and over again to be a “notoriously difficult exercise,” it is vital to realize that poisonous ideologies do not emerge from thin air, oppression, corruption and injustice fuels extremism and violence.

“Extremist leaders cultivate the alienation that festers. They themselves are pretenders, criminals, gangsters, thugs on the farthest fringes of the faiths they claim to represent. Yet they prey on disaffected young people without jobs or even a sense of belonging where they were born. And they exploit social media to boost their ranks and make fear go viral,” Ban said.

Second on the list of essentials to combat extremism is promoting human rights. The Secretary-General warned against “sweeping definitions” of terrorism that too often criminalize the legitimate actions of opposition groups, civil society organizations and human rights defenders.

“Governments should not use the fight against terrorism and extremism as a pretext to attack one’s critics. Extremists deliberately seek to incite such over-reactions. And we must not fall into those traps,” he said.

Third, preventing violent extremism requires a multi-pronged approach. While military operations are crucial, they are not the entire solution. “Bullets are not the silver bullet,” Ban said, emphasizing that while missiles may kill terrorists, good governance kills terrorism.

“Human rights, accountable institutions, the equitable delivery of services, and political participation, these are among our most powerful weapons,” the Secretary-General stressed.

Combating extremism must start in the classroom, he added.

According to him, education must play a decisive role and children must be taught compassion, diversity and empathy.

Finally, the fourth priority is recognizing that violent extremism is a global challenge. It transcends borders. No single country can defeat terrorism. Rather all country must come together, ‘join hands’, to win the battle against violent extremism.

The UN Global Counter-Terrorism Strategy, which was adopted by the UN General Assembly in 2006, provides such a comprehensive framework. And last September, in a meeting chaired by US President Barack Obama, the Security Council adopted a resolution further strengthening collective efforts.

Ban also expressed concern over the connection between anti-immigration forces and extremists who feed off each other in a ‘death spiral of intolerance.’

The UN will present a plan of action to prevent violent extremism to its General Assembly later this year, the Secretary-General said. A special event will be held in the coming months to bring together faith leaders to send a message of tolerance and solidarity.

“I take heart when I read of a Muslim clerk spiriting Jewish patrons to safety in a Paris grocery store…or when Christians open a cathedral to Muslims fleeing carnage in the Central African Republic…or when thousands counter terrible bloodshed with marches of solidarity from Copenhagen to Chapel Hill,” Ban concluded.

They expressed deep concern over the situation in the North African country and stressed the importance of political dialogue as the only way out of the current crisis. They fully supported the efforts of the Special Representative of the Secretary-General for Libya, Bernardino León, to facilitate dialogue. They emphasized the importance for all parties to participate in the next round of talks.

The UN chief also met with Nabil El-Araby, Secretary General of the League of Arab States; as well as with Moussa Faki Mahamat, Minister of Foreign Affairs of Chad; with Iyad Ameen Madanim, Secretary General of the Organization of Islamic Cooperation; and with Abdul Hassan Mahmood Ali, Minister of Foreign Affairs of Bangladesh.