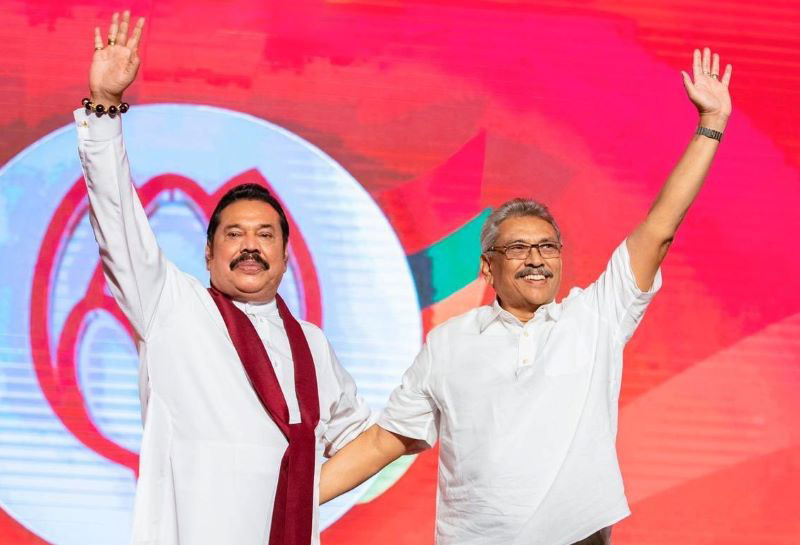 Colombo: The Sri Lankan electorate handed an unprecedented power to the Rajapaksha family after the brothers registered a landslide win, trouncing their opponent, in the recently concluded elections.

According to reports, Prime Minister Mahinda Rajapaksa’s Sri Lanka Podujana Party (SLPP) won 145 seats and can also claim to have the support of at least five allies in the 225-member Parliament, thus giving them the required two-thirds majority to alter the constitution and undo reforms made by their predecessor.

"Thank you PM @narendramodi for your congratulatory phone call. With the strong support of the people of #SriLanka, I look forward to working with you closely to further enhance the long-standing cooperation between our two countries. Sri Lanka & India are friends & relations," Mahindra Rajapaksha tweeted, announcing Indian Prime Minister's support after his win.

Mahindra, 74, will likely be sworn in as the Prime Minister by his younger brother, President Gotabaya Rajapaksa, 71.

"My heartfelt congratulations to all of you who gave a landslide victory to the Sri Lanka People's Alliance in this general election to reaffirm the "Prosperity Vision" policy I put forward in the last Presidential Election through the people's power. @PodujanaParty," President Rajapaksha's tweet in Sinhala read.

The vote, which took place on Wednesday, saw 75 percent of the 16.2 million eligible voters exercise their constitutional rights.

According to official results, the SLPP received 6.8m votes to seal the brothers fate and pave way for a dynastic rule in the island nation.

The main opposition party, a new party formed by Sajith, the son of assassinated president Ranasinghe Premadasa, won 54 seats and was placed a distant second.

Former Prime Minister Ranil Wickremesinghe not only lost his own seat, his party managed to win just one, losing a staggering 105 seats, which they had won in the last elections.

The polls, which were scheduled to take place in April, were postponed twice due to the Covid-19 pandemic.

"As the new parliament convenes, we hope the government will renew its commitments to building an inclusive economic recovery, upholding human rights and the rule of law, and protecting the country's sovereignty. We look forward to partnering with the government and new parliament," the U.S. Embassy in Colombo said in a statement.

Gotabaya Rajapaksha won the November Presidential polls quite easily riding on a nationalist agenda following the Easter Bombings in 2019, which resulted in the death of 279 people.

Following his appointment, he appointed his brother Mahinda as the prime minister.

He had sacked the country's assembly in March, leaving it without a parliament and was instrumental in postponing the polls twice.

"He is hugely popular among the Sinhala majority for crushing the Tamil Tiger separatist rebels in 2009 when he was defence secretary. Many in the country also credit his administration for bringing stability and successfully containing the coronavirus outbreak," said a BBC analysis.

"Gotabaya Rajapaksa is accused of human rights abuses during the civil war and also of targeting those who dissented. He always dismissed such accusations - but they have not gone away," it added.

Mahinda Rajapaksa had previously served as the President, from 2005 to 2015.

Despite several allegations against them from the opposition, the family continues to enjoy support from the Sinhala community for their handling of national issues.

"The handling of coronavirus crisis by President Gotabaya Rajapaksa has invoked a lot of confidence in the people in contrast with the shambles the last government made following the Easter bombing attack last year," Al Jazeera reported.

The country has reported 2,839 confirmed cases, including 11 deaths, thereby largely containing the disease, which has affected millions in neighbouring India and thousands in Bangladesh, China and Pakistan.

Power sharing
Gotabaya is expected to strengthen his power by curbing some from the Prime Minister. This may trigger sibling rivalry, according to experts.

However, the senior Rajapaksha, Mahindra, is expected to remain firm and not cede powers.

Mahindra, a seasoned politician, has served as the President earlier. He now plans to facilitate his son Namal to take his throne, once he leaves it.

Namal, who contested the elections, is likely to be handed a key portfolio, thus enabling him to get used to the political highs and lows in Sri Lanka.
Related Images