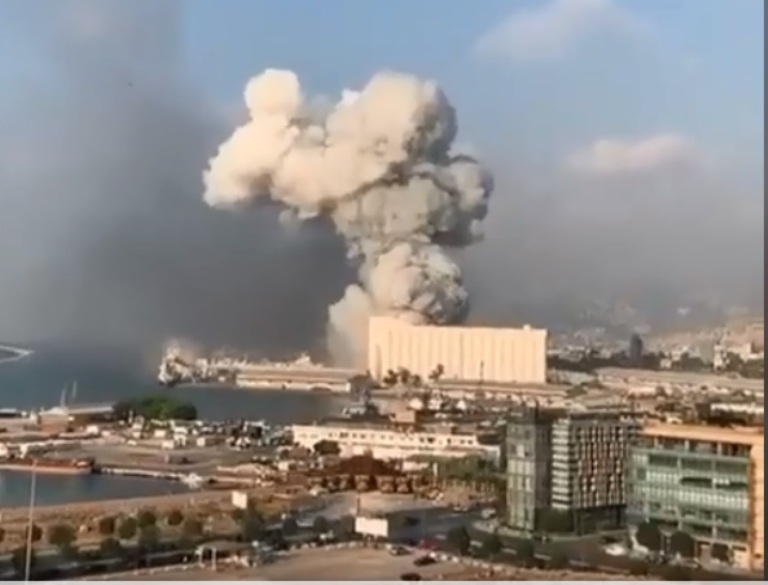 Beirut/IBNS: At least 50 people were killed and countless injured after a massive explosion rocked the Lebanese capital Beirut on Tuesday, sending huge plumes of smoke billowing into the sky.

UPDATE:  At least 50 died in the explosion, the country's health minister confirmed. The cause of the explosion is not yet known.

The huge explosions were captured on camera and shared by Lebanese media which showed several people trapped under rubble.

The cause of the explosions was not known immediately.

According to local media reports, hundreds have been left wounded as a result of the explosions. Later foreign TV channels put the toll at 50.

Cars were seen destroyed and left abandoned in the streets.

Several shops in the vicinity were reportedly damaged with window panes shattering on roads.

A part of the area has been cordoned off by the security officers.

A huge blaze could be seen burning at the port area in the video where ambulances were seen rushing to take the wounded to hospitals.

This comes at a time when Lebanon is already gripped with tension ahead of the verdict in a trial over the killing of ex-PM Rafik Hariri in 2005.

A UN tribunal is due to announce its verdict in the murder case of Hariri on Friday.

Four alleged members of the Shiite Muslim movement Hezbollah are on trial in connection with the murder of Hariri in a car bomb attack.

Lebanon's economy is also suffering its worst economic crisis in decades, which has left nearly half of the population in poverty.