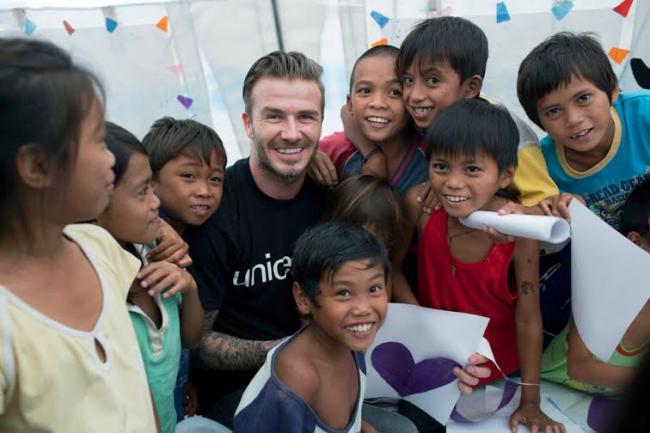 “On Monday, the need to help children has never been greater, and since retiring, I have more time and I want to do so much more,”  Beckham said in a press release marking the unveiling of 7: The David Beckham UNICEF Fund – his “ground-breaking initiative” to protect millions of children around the world from danger.

“This is me stepping up my support – because I can, because I want to, because the outcome will help change the lives of millions of children,” he continued.

“Everything I have done, my football career, my family, has led to this point – this is the moment for me to do what I can to help children in every corner of the world. This is something I want my own children to be proud of.”

Beckham’s latest effort comes after one of the most devastating years for children on record.

As many as 15 million children are caught up in violent conflicts in the Central African Republic, Iraq, South Sudan, Syria, Ukraine and in the Occupied Palestinian territory – including those displaced in their own countries or living as refugees outside their homeland, according to UNICEF.

At the same time, schools have increasingly been commandeered by combatants for military purposes amid a rise in attacks on education and health facilities. Overall, an estimated 230 million children live in countries and areas affected by armed conflicts.

Children are also at serious risk from a wide range of factors beyond immediate emergencies. 168 million across the globe are engaged in child labour and many others are victims of sexual violence, trafficking and female genital mutilation.

The launch of 7, named in honour of  Beckham’s famed jersey number, will inaugurate a series of fundraising initiatives in which the former England captain will plan to “raise millions and speak out for children all over the world.”

Once fundraising objectives are achieved, UNICEF would be able to provide child protection services and counselling support to children in El Salvador, the country with the highest homicide rate among children in the world; provide water pumps and train communities to maintain them in Burkina Faso, where currently 1 in 5 child deaths are caused by diarrhoea; and support breastfeeding mothers to give children the best start in life in Papua New Guinea, where child malnutrition has caused stunted growth in nearly half of all children under the age of five, the UNICEF press release explained.

“There are some very exciting plans ahead and I am so proud to be part of this,”  Beckham added.

Paloma Escudero, from UNICEF’s Global Management Team, acknowledged  Beckham’s longstanding efforts to “speaking up for those who need it most – the world’s most vulnerable children,” noting that the football star had already dedicated 10 years of work as a UNICEF Goodwill Ambassador.

“David has raised awareness of major dangers facing children – including malnutrition, Ebola and AIDS – and has travelled with UNICEF to Sierra Leone, South Africa, Thailand and most recently the Philippines, where he helped raise vital funds for children affected by Typhoon Haiyan,” she affirmed. “Through 7: The David Beckham UNICEF Fund, we can act together to drive positive change for children.”