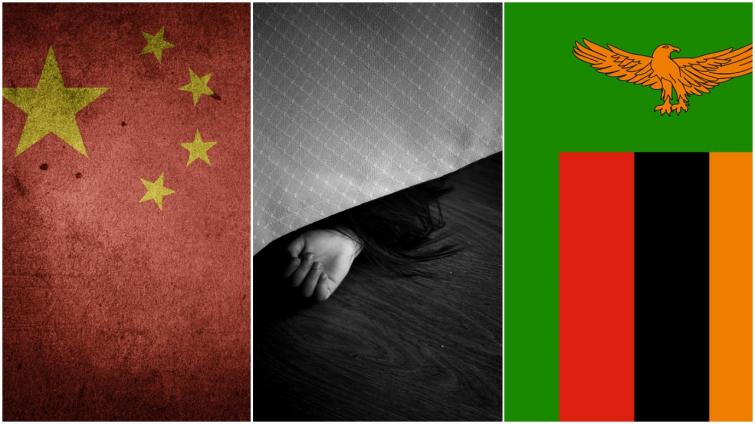 Lusaka: Three Chinese nationals were allegedly murdered by unknown men in Lusaka city of Zambia last month, prompting the Chinese envoy deployed in the country to demand for an immediate probe into the incident.

CCTV footage of the incident has been seized by the police.

At midday on Sunday, May 24, three Zambian attackers with iron bars entered the grounds of a Chinese-owned textile warehouse in Lusaka. Police said they were pretending to be potential customers, CNN reported.

Over the next 17 minutes, the CCTV footage shows, they beat two men and one woman to death in the courtyard, before dragging their bodies into the adjoining warehouse, reported the American news channel.

That's where the footage ends. According to police, the attackers then dismembered their bodies and used flammable materials from the Blue Star clothing business to set their bodies and the building ablaze, burning them so severely that it took Zambian authorities three days to retrieve their charred remains from the rubble, CNN reported.

The attackers even raided the property for valuables after the incident.

The gruesome murder of 52-year-old Cao Guifang, the wife of the textile warehouse owner -- who was in their home province of Jiangsu, in eastern China, when the attack happened -- and her two male employees, Bao Junbin, 58, and Fan Minjie, 33, came at the end of a week when anti-Chinese sentiment in the Zambian capital was nearing boiling point, reports CNN.

In the days leading up to the murder, Lusaka Mayor Miles Sampa had accused Chinese bosses in the capital of "slavery reloaded," used the derogatory term "Chinaman," and, stoking racial divides, reminded the public in a video posted on his Facebook account that "black Zambians did not originate coronavirus. It originated in China", reports the news channel.

It is estimated that around 22,000 Chinese citizens live in Zambia.

Beijing owns about 44% of Zambia's debt, which has led to fear among some Zambians that China has too much control over the country, CNN reported.

While police have not directly linked the murder to anti-Chinese sentiment, the crime came as a reminder of the violent outbursts some Chinese have faced while living in Zambia, a key partner for China along its coveted Belt and Road project, the news channel reported.

"Even some of the people who stayed here for more than 20 years, they've also been shocked by such kind of criminal activities," Eric Shen, a Chinese businessman who has been living in Zambia for more than a decade, told the news channel.

In a statement on its website, the Embassy said it urged the Zambian authority to punish the suspects in accordance with laws and take effective measures to protect the lives and security of Chinese living in Zambia, reports Global Times.

Meanwhile, Chinese nationals, who are living in the country, have expressed concern over their own safety.

Some reports by Western and local media and politicians have stigmatized China and are affecting Africans' ideas of China and Chinese people, Chinese nationals working in Zambia told the Global Times.