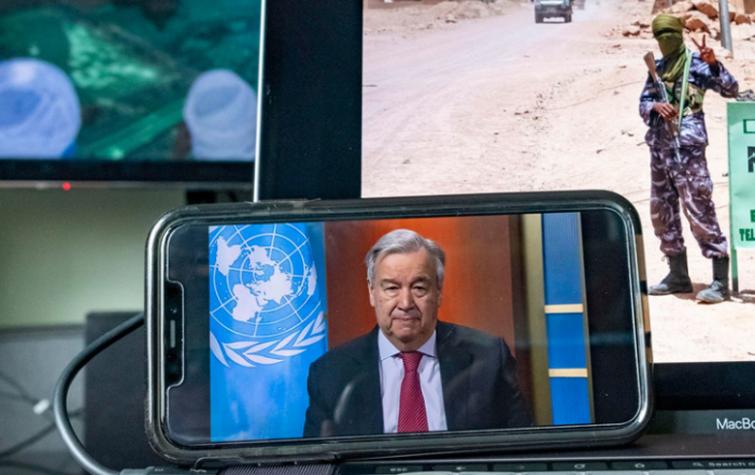 New York/IBNS: There should be only one fight in our world today, the United Nations Secretary-General said on Friday, issuing a loud clarion call to join “our shared battle against COVID-19”.

“We know the pandemic is having profound social, economic and political consequences, including relating to international peace and security”, the UN chief said, in a virtual press conference outlining the impact so far of the ceasefire appeal.

He cited sustained restrictions on movement by governments everywhere, and factors that could contribute to rising discontent and political tensions, but maintained that “the global ceasefire appeal is resonating across the world”.

He said that the call has been endorsed by 70 Member States, regional partners, non-State actors, and others.

“Religious leaders – including Pope Francis – have added their moral voice in support of a global ceasefire, as have citizens through grassroots mobilization online”, he told reporters.

Although a substantial number of fighters and militias have accepted the call, the UN chief stressed that “there is a huge distance between declarations and deeds – between translating words into peace on the ground, and in the lives of people”.

He acknowledged the “enormous difficulties” in implementing a truce to halt conflicts that have festered for years, where “distrust is deep”, and recognized that “any initial gains are fragile and easily reversible”.

The UN chief observed that in many critical situations, there has been no let-up in fighting, and in some, conflicts have even intensified.

“We need robust diplomatic efforts to meet these challenges”, he asserted.  “To silence the guns, we must raise the voices for peace”.

Mr. Guterres explained that he and his envoys are engaging with conflict actors to help push forward ceasefires.

As the UN Special Envoy in Yemen works to convene the parties to discuss COVID-19 crisis management and nationwide ceasefire mechanisms, the conflict has spiked – despite expressed support for a truce by the Government and warring parties.

“I call on all governments and movements involved and their supporters to put an end to the catastrophic conflict and humanitarian nightmare – and come to the negotiating table”, implored the UN chief.


In Syria, where the first COVID-related deaths have now been reported, the UN Special Envoy has appealed for a “complete and immediate” nationwide ceasefire to allow for “an all-out-effort against COVID-19”.  Syria, Libya, Afghanistan

Turning to Libya, although the warring parties have welcomed calls to stop the fighting, clashes have escalated drastically on all frontlines, obstructing efforts to effectively respond to COVID-19.

“I urge both parties, and all others directly and indirectly involved in the conflict, to immediately halt hostilities to allow authorities to effectively address the COVID-19 threat”, underscored Mr. Guterres.

In Afghanistan, a 21-member team was announced last week to directly negotiate with the Taliban, and technical contacts established for an initial prisoner release.

Pledging his full support, the Secretary-General stated his belief that “the time has come for the Government and the Taliban to cease hostilities as COVID-19 looms over the country”.

For all nations in conflict, the UN chief made a special appeal to those with influence on warring parties “to do everything possible for the ceasefire to become a reality”.

He called on “all those that can make a difference, to make that difference”, by urging and pressuring combatants around the world to lay down their arms.

Noting that there is a chance for peace, Mr. Guterres maintained, “but we are far from there”.
COVID-19 overshadows conflicts

“The need is urgent”, he said. “The COVID-19 storm is now coming to all these theatres of conflict”.

Against the backdrop of a coronavirus moving swiftly across borders, devastating countries and upending lives, Mr. Guterres projected that, “the worst is yet to come”.

“We need to do everything possible to find the peace and unity our world so desperately needs to battle COVID-19”, concluded the Secretary-General. “We must mobilize every ounce of energy to defeat it”.


Photo caption and credit:UN Photo/Loey Felipe Secretary-General António Guterres holds a virtual press briefing on the impact of his call for a global ceasefire during the COVID-19 outbreak.