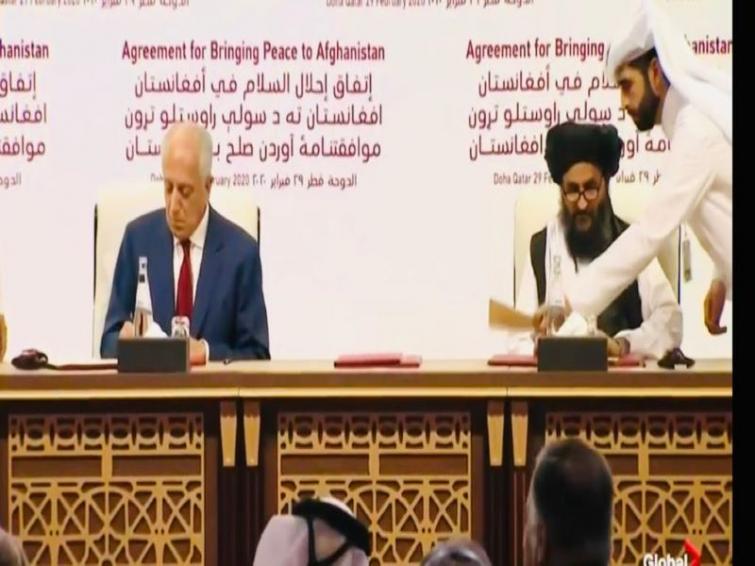 Doha/IBNS: After nearly 19 years of hostilities, United States signed a peace deal with Taliban which came after months of negotiations between the representatives of the two sides here.

The peace deal was signed by US peace envoy Zalmay Khalilzad and Mullah Brother of the Taliban, the official said.

The US had wanted Taliban to agree on a ceasefire before signing the peace deal and it finally happened on Saturday, when the Islamist outfit asked its fighters to refrain from launching new attacks.

Mohammed Naeem, a Taliban representative in Doha, called the deal "a step forward" and "end of war in Afganistan", reported Al Jazeera.

US Secretary of State Mike Pompeo took part in the parleys. "I know there will be a temptation to declare victory, but victory for Afghans will only be achieved when they can live in peace and prosper," he said addressing the Taliban, Al Jazeera quoted.

He enumerated key conditions of the deal between the US and the Taliban. "Keep your promises, cut ties with Al-Qaeda. Keep up the fight against ISIS," Pompeo added.

Ahead of the signing of the treaty US and Taliban in a joint statement said the US and NATO soldiers will be withdrawn from Afghanistan within 14 months, Al Jazeera said in its report.

The statement added that the Afghan government will engage with the United Nations Security Council "to remove Taliban members from sanctions list by May 29", the report said.

Peace talks between the two sides began in 2018 but were interrupted at least twice due to Taliban attacks on US military personnel in September and December last year.

According to a CNN report, on Feb 15 the US officials assured Afghan President Ashraf Ghani and other Afghan delegates that Washington will not abandon Afghanistan after signing an agreement on the reduction of violence with the Taliban movement and is ready to use lethal force if the deal is violated.

We guarantee you if they [Taliban] break [terms of the deal] US will have enough lethal power to destroy them, we are with the Afghan now and we will be with Afghanistan forever, " US officials told the Afghan side, as quoted by CNN.

The Taliban and US-led forces have been fighting since 2001 when the former was toppled from power in Afghanistan.

The intra-Afghan talks are likely to begin on March 10 but details of the talks are not known yet, reported Al Jazeera. So far, the Taliban has refused to talk to western backed Afghan government, describing it as a "puppet regime".