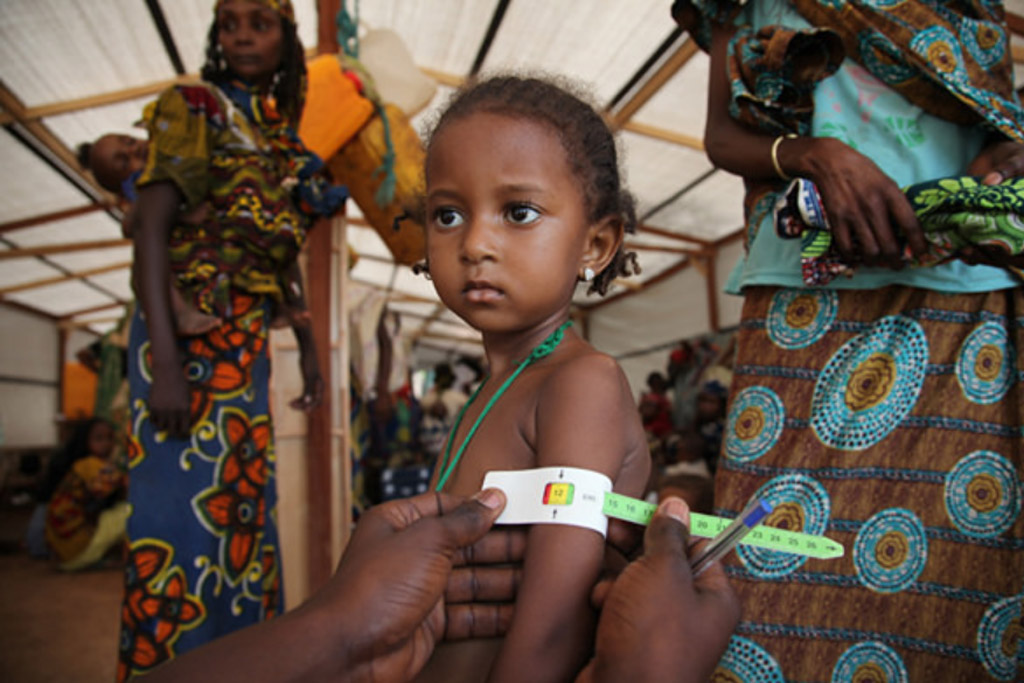 India Blooms News Service | | 26 Apr 2014, 11:57 am
#UNICEF, # children, # malnutrition, # Central African Republic
New York, Apr 26 (IBNS): The number of children being treated for severe acute malnutrition in the Central African Republic's war-torn capital, Bangui, has tripled since the beginning of 2014, the United Nations Children's Fund (UNICEF) confirmed on Friday, predicting that more children are likely to suffer in the coming months.
“The majority of families have been unable to plant their crops or earn a living, and also due to poor access to safe water, sanitation and health care,” UNICEF spokesperson Christophe Boulierac told journalists in Geneva.
Almost 680 children during the first quarter of this year were treated at the Bangui Paediatric Hospital, the city’s largest in-patient centre, compared with 214 children last year.
“Here in CAR, more children will die from malnutrition and related diseases than from bullets,” said UNICEF Representative in CAR Souleymane Diabaté. “Malnutrition is even more deadly in the rainy season, when diarrhoea and malaria are at their peak. Both diseases put the lives of already malnourished children at risk.”
An estimated 28,000 children could suffer from acute malnutrition this year, Boulierac said citing figures from partners working on nutrition.
The UN agency has requested USD 11 million for this year to fund therapeutic and preventive nutrition programmes for children in the country, with USD 3.8 million raised so far.
Also on Friday, the UN World Food Programme (WFP) reiterated its request for USD 47 million to fund its operations in the country through the end of August, where its staff and partners have now transferred over 1,800 metric tonnes of food despite insecurity constraints.
Violence in central CAR continued this week with confrontations between armed groups and direct attacks on villages, the UN Office for the Coordination for Humanitarian Affairs (OCHA) reported. Spokesperson Jen Laerke said some 5,300 people have fled their homes and taken shelter in religious sites.
OCHA’s Director of Operations, John Ging, is due to arrive on Saturday in Boda, a town located in the southern part of CAR, for a four-day visit to the country.
Fighting in CAR has taken on an increasingly sectarian nature following a 2012 rebel-led coup and has since become more brutal with reports of ongoing human rights violations and clashes that have displaced hundreds of thousands of people and left 2.2 million in need of humanitarian aid.
Two independent UN human rights experts on Friday warned that amidst the fighting, evacuating religious minorities should be used only as a measure of last resort and implemented in full consultation with them and in accordance with international standards.
The Special Rapporteurs on the human rights of internally displaced persons (IDPs), Chaloka Beyani, and on minority issues, Rita Izsák, stressed that – even in such an extreme situation – it is important to ensure that the communities concerned are enabled to take their own decision.
“The dilemma to either stay and risk one’s life or be evacuated is enormous for religious minorities in the Central African Republic,” they said, noting that the individuals have to be able to decide for themselves and be guaranteed a safe return.
UN Secretary-General Ban Ki-moon last week reiterated his appeal to the people of CAR to build a unified country through peace, turning once again to the radio to disseminate his address as he had done in February.
Strongly concerned about the situation in the country, the Security Council agreed to deploy a peacekeeping mission there, although the military and police components of the mission will not be operational until mid-September.
(A girl receives a nutrition screening in Bangui, where conflict has limited access to health and other services, and rates of malnutrition are on the rise. Photo: UNICEF/Roger LeMoyne)
Related Images