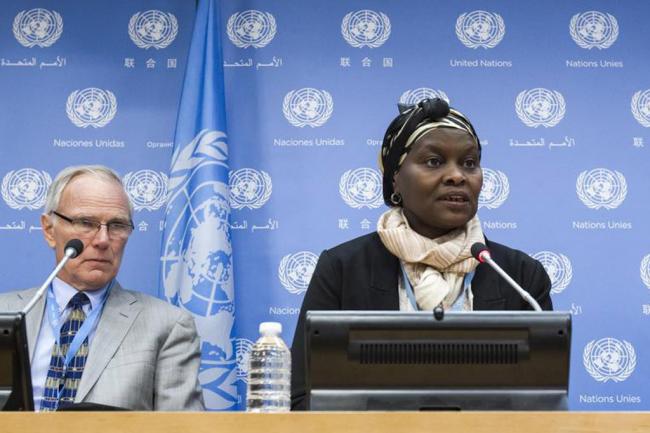 India Blooms News Service | | 22 Jan 2015, 09:55 am
#CAR war crime, # UN investigators urge establishment of war crimes tribunal
New York, Jan 22 (IBNS) United Nations-mandated investigators warned on Wednesday that war crimes are being committed in the Central African Republic and called for the establishment of a â€˜truly internationalâ€™ tribunal with international judges who could objectively investigate and prosecute perpetrators of such crimes in the war torn country.


Briefing the press at a UN Headquarters news conference this afternoon, Fatimata M’Baye and Philip Alston, two members of the International Commission of Inquiry on the Central African Republic (CAR), reported that crimes against humanity have been widely committed by all parties to the ongoing conflict in the country.

The Commission, set up by the UN Security Council in 2013 and tasked with probing reports of human rights violations in the long-embattled nation, compiling information and helping identify the perpetrators of such abuses, is scheduled to submit its latest report to the Council on Thursday .

More than two years of civil war and sectarian violence have displaced thousands of people in the CAR. According to UN estimates, nearly 440,000 people remain displaced inside the country while some 190,000 have sought asylum across the borders. At the same time, more than 36,000 people – including the Peuhl – remain trapped in enclaves across the country, hoping to find asylum in neighbouring States.

In December, Under-Secretary-General for UN Peacekeeping Operations Hervé Ladsous warned of a potentially explosive situation in the CAR amid continuing violent clashes between the mainly Muslim Séléka alliance and anti-Balaka militia, which are mostly Christian.

Today, two of the Commission’s three members warned that unless the world pays attention and holds perpetrators accountable, the situation in CAR could very much spiral into genocide. A full list of perpetrators ‘surely implicated’ in the conflict will be handed-over by the Commission’s President to the Secretary-General and could be shared with other agencies.

“We are here to say that we make some recommendations to the Security Council and Secretary-General but also to the African Union and the CAR Government,” said M’Baye, adding that: “We think that for the conflict in CAR not to grow even more, the international community must act fast against those who abuse human rights law and humanitarian law.”

Alston said that the latest inquiry, conducted over the course of the past year at the request of the Security Council, is strongly recommending that accountability mechanisms be put in place to identify the ‘cycle of impunity’ in CAR.

He emphasized that ‘Government officials have a well-founded expectation of impunity and assume that no action will be taken for their crimes’. He added while there is no sufficient evidence of genocidal intention, crimes against humanity ‘have certainly been perpetrated.’

The report recommends the establishment of a ‘fully international’ tribunal to investigate such crimes. The UN is currently in negotiations to establish a criminal court to prosecute ‘political players’ who have committed crimes against humanity, Alston added.

“If that goes ahead we are extremely concerned in making sure that a majority of the judges must come from the international community…We do not believe that national judges have that type of independence,” Alston said.

That goes for funding as well, he stressed, emphasizing that the CAR Government ‘simply does not have the resources nor the political incentive’ to fund the justice-seeking process. Hence, the international community must step up and fund a tribunal.

“With none of the key countries coming forward to say that they will fund it, we are deeply concerned that the UN will stumble in creating an [effective] tribunal and will be unable to prosecute effectively,” he added.

Responding to a question from a journalist about why the Commission was reluctant to make claims of genocide even though there seems to be evidence of such crimes, M’Baye said that there is a possibility that genocide may have occurred.

However, the criteria in place right now have determined that it is too early to call what has happened ‘genocide’. She emphasized that genocide can occur ‘if we don’t pay attention and say if everything is well in the country.”

When asked about violations committed by UN and international peacekeepers, Alston said that whenever there is a major international peacekeeping operation, ‘there will be problem’ of some sort. While it does not ‘discredit’ the UN, the Organization does have a responsibility to set up a system that investigates claims and holds perpetrators accountable.

The three-person inquiry, established by the Security Council, includes Fatimata M’Baye of Mauritania, Philip Alston of Australia and its head, Bernard Acho Muna of Cameroon.