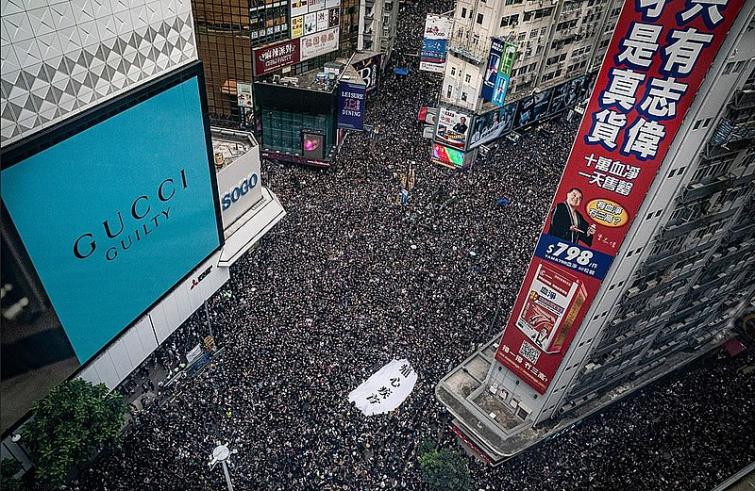 Moscow/Sputnik/UNI: Police in Hong Kong shared on Wednesday their suspicions that the Chinese University of Hong Kong was used to stock or make weapons after hundreds of petrol bombs were thrown on its campus during Tuesday’s violent clashes between protesters and police officers.

"What’s happened in the Chinese University of Hong Kong (CUHK) means a bad omen for Hong Kong. A university is supposed to be a breeding ground for future leaders, but it became a battlefield for criminals and rioters. What’s worse, we have strong suspicion that the school was used as a weapons factory as several hundred petrol bombs were thrown on the campus in one single day, the highest number so far," Tse Chun-chung, the chief superintendent of the Police Public Relations Branch, said during a regular press briefing.


Tse stressed that police officers used rubber bullets, bean bag rounds and tear gas to disperse the protesters on the CUHK only for the purpose of securing the No.2 Bridge next to the university.


"We must stress that during the whole day, police officers only responded to rioters’ violence and entered CUHK to disperse the mob. Our goal is to safeguard the No. 2 Bridge and to prevent rioters from dropping objects from height onto the moving vehicles underneath," he said.


According to Tse, the police tried to guard the No.2 Bridge to prevent protesters from dropping objects on vehicles traveling on the highway under it, which could have caused serious traffic accidents.


However, a large number of international academics and university administrators, including CUHK faculty members, issued a statement urging the police to follow protocol while dealing with protesters on university campuses.


"We urge the Hong Kong Government to exercise restraint in managing the current crisis, ensuring that the Police follow proper protocol in executing their duties. Universities must have the flexibility and autonomy to deal with matters of conduct without police intrusion. Police should only enter campuses with search warrants," the statement said.


According to the statement, the academics had a different view of Tuesday’s clashes.


"Without clear targets of arrest, nor search warrants, riot police stationed themselves on and around university property, provoking students with accusations of unlawful assembly. In the case of The Chinese University of Hong Kong, riot police stormed onto campus and made arrests. The chaos that ensued has completely disrupted and undermined the functions of universities as sites of open inquiry, freedom of expression, and effective teaching," the statement said.


Amid the escalating violence in the city, local authorities in Hong Kong began to allow universities and schools to decide whether they would suspend classes on Wednesday.


The massive protests began in Hong Kong in early June over a controversial extradition bill, which was officially withdrawn in October. Frustrated with the local authorities’ heavy-handed responses to the protests, the demonstrators expanded their demands to an independent investigation into alleged police brutality and greater civil liberties, including universal suffrage, while calling for the resignation of Hong Kong Chief Executive Carrie Lam.