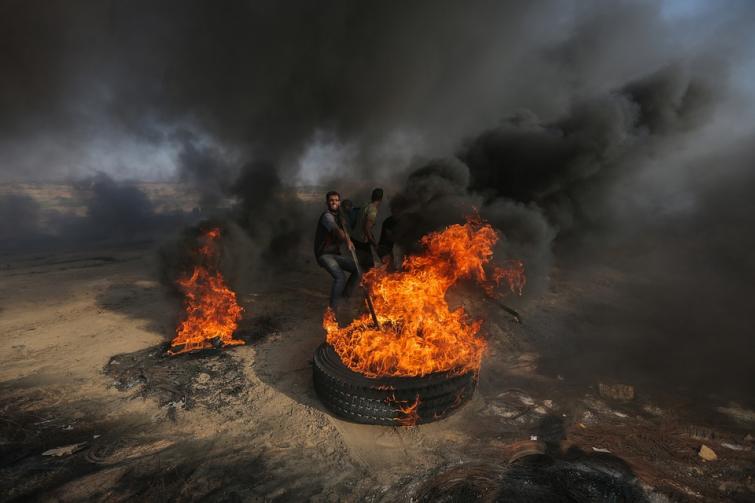 At least 96 Palestinians injured in clashes with Israeli soldiers in eastern Gaza: official

Gaza/Xinhua/UNI: At least 96 Palestinian demonstrators were injured during clashes in eastern Gaza Strip with Israeli soldiers stationed on the border, according to a local official.

Ashraf al-Qedra, spokesman of the Health Ministry in Gaza on Friday said in an emailed press statement that 96 Palestinian demonstrators were injured in eastern Gaza, including 57 who were shot and injured by Israeli soldiers' gunfire.

Hundreds of Palestinians flocked to the eastern borders of the Gaza Strip with Israel to join the weekly anti-Israel rallies and protests, better known as the "Great March of Return," which has been going on since late March last year.

Field paramedics said that dozens were injured after inhaling the intensive tear gas fired by the Israeli soldiers, and some were also injured by the rubber-coated metal bullets.

Hazzem Qassem, spokesman of the Hamas movement in Gaza, told reporters that the masses of participants in the Great March of Return "again show our people's will to topple all the planned plots against our cause."

The Highest Commission of the Great March of Return has earlier called on the coastal enclave's populations to join the 81st weekly rallies to protest against the Balfour Declaration that will be marked on Saturday.

During the World War I, the British government issued the declaration on Nov. 2, 1917, announcing its support for the establishment of a "national home" for the Jewish people in Palestine.

The commission said in a press statement that the Palestinians call for referring "the cases of the occupation (Israel) crimes to international courts," adding "we call on the Britain to apologize to our people for issuing the declaration."