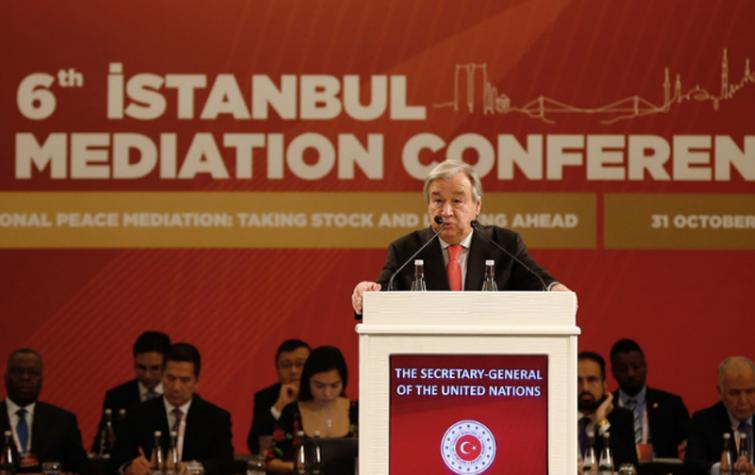 New York/IBNS: Mediation is “one of our most important tools to reduce and end conflict”, United Nations Secretary-General António Guterres told the sixth Istanbul Mediation Conference, in the Turkish capital on Thursday.

Elaborating on the “positive results” that mediation and dialogue can bring, he referred to signs of progress by Syrian leaders who are meeting in Geneva after nearly nine years of brutal civil war, as “no clearer illustration of the importance of political solutions to conflict”.

“Yesterday’s first meeting of the Constitutional Committee was a landmark, a foundation for progress, and in itself a clear success of mediation”, he said, referring to face-to-face talks between the Syrian Government and opposition for the first time since 2011.

Mediation and dialogue are delivering positive results to reduce conflict and human suffering across countries and regions.

Despite the challenging geopolitical context the world faces, we must continue building on this success & ensure dialogue is part of all peace efforts.

Guterres expressed his hope that this would be the first real step towards a political solution to “end this tragic chapter in the lives of the Syrian people” and create an opportunity for the voluntary, safe return of all Syrians to their places of origin.

Around 13.1 million Syrians are in need, with 6.6 million internally-displaced, around three million still in hard-to-reach and besieged areas, while over 5.6 million have fled the country since 2011, according to the UN refugee agency, UNHCR.

While welcoming dialogue to end the most recent fighting in the country’s northeast, Mr. Guterres told the conference he remained “very concerned” about the situation in Idlib, to the west, and repeated his call for “maximum restraint, de-escalation and the protection of civilians and civilian infrastructure on all fronts in Syria”.

He lauded other positive mediation and dialogue results, particularly in African countries, and urged everyone to “build on this success”.

Turning to the wider geopolitics, the UN chief noted that divisions in the international community are contributing to unpredictability and insecurity – negatively impacting mediators who rely “on the political will of governments and armed groups that are parties to the fighting”.

“Now they must also work for the alignment of outside powers, as today’s conflicts are likely to have regional and international involvement.” Moreover, populism and marginalization are contributing to radicalization, instability, violence and suffering, he added.

Even in some peaceful societies, leaders are fueling tensions without care for the consequences – UN chief

“Even in some peaceful societies”, he observed, “leaders are fueling tensions without care for the consequences”.

Guterres maintained that mediation addresses both the root causes and consequences of conflict, which are “vital to prevent violence recurring”.

The UN chief said more coordination was needed with regional organizations, civil society groups and others involved in mediation.

“Resolving today’s complex conflicts means bringing together the three tracks of mediation in a coordinated way: track one, comprising political and military leadership, supplemented by unofficial and informal contacts at the track two level to test ideas; and track three, to widen the process, including civil society and grassroots initiatives”, he spelled out.

While underscoring the importance of women’s participation in formal peace processes and the contribution of youth, he highlighted “strategic and operational mediation partnerships”, citing the African Union’s  as “exemplary” in reaching countries across the continent.

And yet, “despite the growing number of groups involved, a relatively small proportion of conflicts receive mediation”, he bemoaned, urging everyone to “find the resources to engage across the board”.

Directing attention to social media and digital technologies, the UN chief flagged that while they can improve outreach and inclusivity, they also “create serious challenges for mediation”, and singled out online hate speech, misinformation campaigns and manipulating content to create poisonous narratives.

Guterres recalled that the UN was created almost 75 years ago “to save the world from the scourge of war” and urged everyone to “do all in our power to end the meaningless cycle of destruction and reconstruction”.

The Secretary-General also visited the Turkish-headquartered UN Technology Bank for Least Developed Countries on Thursday, calling it “a positive sign of hope and a direct response to the 2030 Agenda’s promise to leave no one behind”.

In order to bridge the so-called digital divide for the two billion people still not connected to the internet, the bank opened for business in the city of Gebze, last year. It is funded entirely from extra-budgetary resources and relies on voluntary contributions.

Guterres asserted that as it establishes partnerships both within and outside the UN system, the Bank was improving coordination for science and technology innovation across Least Developed Countries and will play an important role in South-South collaboration, for the whole developing world.