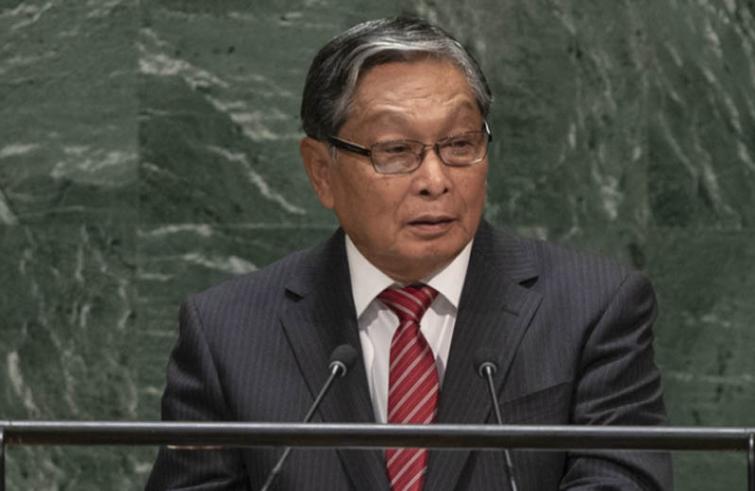 New York: Myanmar is prioritizing the repatriation of scores of people who fled violence in northern Rakhine state for Bangladesh, a senior official from the country said on Saturday, the fifth day of debate in the UN General Assembly.

Some 900,000 mainly Rohingya refugees from Myanmar have sought shelter in the Cox’s Bazar region in south-eastern Bangladesh following military operations two years ago.

Kyaw Tint Swe, Myanmar’s Union Minister for the Office of the State Counsellor, said repatriations would be carried out in line with a November 2017 agreement with Bangladesh.

“Our priority now is to expedite repatriation and to create a more conducive environment for verified returnees,” he said, highlighting cooperation with Bangladesh, the UN and the Association of South East Asian Nations (ASEAN), among others.

Swe said displaced people who had been living in Rakhine state “have a different legal status.”

Those who qualify for citizenship will be issued with citizenship cards. The rest will receive National Verification Cards which he likened to the “green card” issued to immigrants in the United States.

Swe said Government efforts to bring peace and stability to Rakhine state “predate the violent attacks by the ARSA (Arakan Rohingya Salvation Army) terrorist group in 2016 and 2017 that triggered off the current humanitarian crisis.”

Some 300 people have already returned to Myanmar of their own volition “despite obstacles, including killings and threats by ARSA,” he said.

The Minister dismissed demands to establish a “safe zone” in Myanmar as “neither warranted, nor workable.”

He called on Bangladesh to faithfully implement the bilateral agreement, which he described as “the only feasible way to resolve the issue of the displaced persons.”

Regarding accountability for the events in Rakhine state, Mr. Swe reported that a military investigation is currently underway.

“A recent announcement suggests that there will soon be a court martial,” he added.

However, he said “independent scholars have already identified the request is problematic in that it excludes alleged crimes committed by the Arakan Rohingya Salvation Army, with deliberate omission of the undisputed fact that their actions precipitated the current displacement.”

Other concerns cited include that the ICC Prosecutor “relies heavily on human rights reports” which contain “factual errors” on both national and international law.

In Swe’s view, the ICC Prosecutor is focused on the outflow from Rakhine state yet remains “silent” on what he called “the broader picture” behind the displacement, as well as the various parties involved.

“This silence widens the divide between the International Criminal Court and the people of Myanmar who have been made to feel that their concerns are of less import than the perceptions of influential nations and organizations acquainted but superficially with the true situation on the ground,” he said.

Photo captions and credit
UN Photo/Cia Pak
U Kyaw Tint Swe, Union Minister for the Office of the State Counsellor of Myanmar, addresses the general debate of the General Assembly’s 74th session.