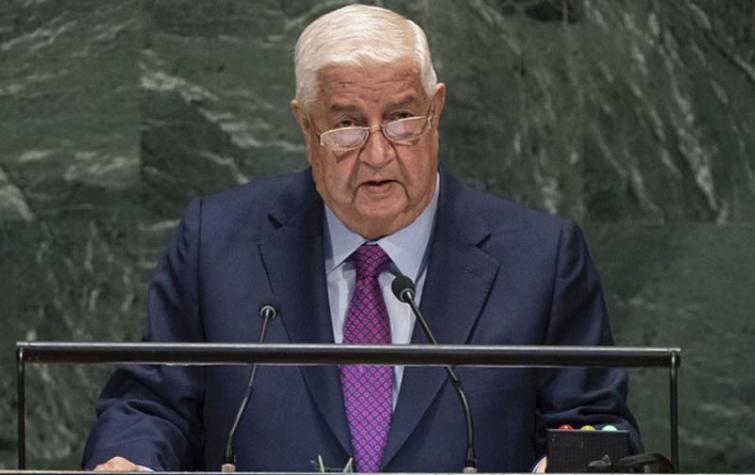 New York: Although terrorism is a “global nightmare which haunts everyone”, some countries have invested in terrorism as a tool to impose their “insidious agendas” on other nations, Syria’s Deputy Prime Minister Walid Al-Moualem told the UN General Assembly on Saturday.

“The case of Syria has been the clearest example of such foreign investment in terrorism,” he said.

“Tens of thousands of foreign terrorist fighters have been brought to Syria from more than a hundred countries, with the support and cover of States that are known to all. Even more, these same States deny us the right to defend our people against terrorists, which they consider ‘freedom fighters’ or ‘Syrian armed opposition’, as some like to call them.”

Al-Moualem called Idlib the most recent example of this situation, stating that the north-western city hosts the largest gathering of foreign terrorist fighters in the world.

Their crimes include continued rocket and mortar attacks against nearby civilian areas, using civilians as human shields, and preventing people from leaving via a humanitarian corridor established by the Government, he stated.

“Would one of your governments stand and watch if faced with a similar situation?” he asked.  “Would you ever forfeit your right and duty to defend your people and liberate your country from terrorists and foreigners?”

The Foreign Minister added that this Government has engaged in international political initiatives on Idlib, including an agreement by Russia and Turkey on the creation of de-escalation zones.

“Meanwhile, in the interim, the Turkish regime has failed to fulfill its commitments under these agreements. Instead, it has provided terrorists with all forms of support, including weapons that are more sophisticated,” he stated.

“The Turkish regime is now rushing, with the support of some Western countries, to protect Al-Nusra Front and other terrorist groups there just as they have done before.”

The Foreign Minister reported on his administration’s recent political efforts, such as agreement on the terms of reference for a Constitutional Committee.

In this regard, he affirmed the Government’s readiness to work with the UN Special Envoy for Syria, Geir Pedersen, and “friendly countries”, though stressing that the process must be Syrian owned and led.

He urged “peace-loving countries that uphold international law” to counter what he called an “illegal and inhumane blockade” which has restricted access to medicine, oil for electricity, and other needed items.