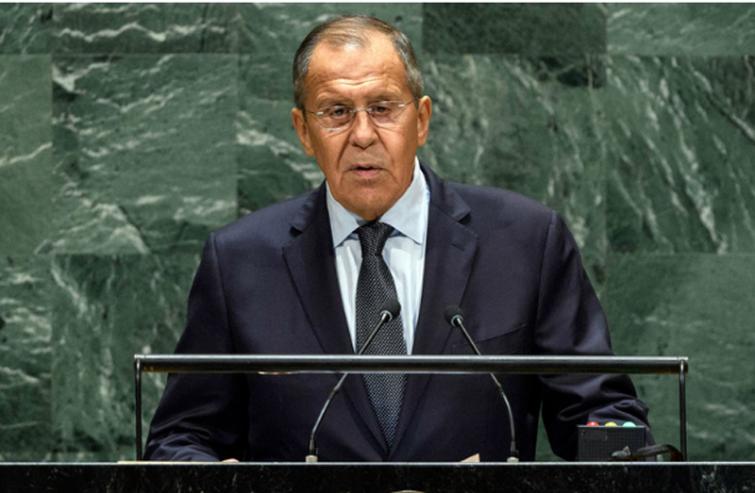 New York: While crediting the United Nations for preventing ‘World War III’, the Foreign Minister of Russia lamented to the General Assembly on Friday that the number of conflicts on the planet has not declined, nor has enmity weakened.

Sergei Lavrov was of the view that the reason for the world’s current state lies “first and foremost”, in the unwillingness of the self-proclaimed winners of the Cold War to reckon with “the legitimate interests of other States”.

“It is hard for the West to put up with its weakening centuries-long dominance in world affairs”, even though new economic centres and political influences have emerged, he said.

Lavrov maintained that “leading Western countries are trying to impede the development of the polycentric world, to recover their privileged positions” and impose their standards of conduct on others.

Moreover, he said that the West has been increasingly loathe to recall international law, saying that instead it “dwells on” a rules-based order aimed to position itself as the only “indisputable source of legitimacy”.

Instead of working collectively, formats “outside of legitimate multilateral frameworks” are decided behind closed doors and declared multilateral agreements, he continued.

And the US has “set a hard line” towards eroding UN resolutions on the international legal framework of the Middle East peace process.

“It suggests waiting for some ‘deal of the century’, meanwhile it has taken unilateral decisions on Jerusalem and the Golan Heights”, endangering the legitimate rights of the Palestinian people, he spelled out.

Lavrov flagged, “the West also has its own ‘rules’ regarding the Balkans”, where it is pursuing “an open course” for undermining Security Council decisions on Kosovo and Bosnia.

Russia’s Foreign Minister underscored that universal conventions together with the UN Security Council resolutions “are an integral part of international law”, and yet the West would like to substitute them for its own rules.

“We’re seeing continued games played with conventions that commit countries to upholding linguistic, educational, religious and other rights of national minorities”, he argued.

“Even here our Western colleagues are guided by their own rules – they turn a blind eye to the open denial of national minorities’ rights and abet the retaining of an ignominious phenomenon of statelessness in Europe”.

Citing the UN Charter’s principle of non-interference in internal affairs, Mr. Lavrov said attempts are underway to add Venezuela “to the list of countries whose Statehood was destroyed before our eyes through aggression or coups inspired from abroad”.

According to Russia’s Foreign Minister, the regulation of cyber space is “among the most critical tasks of the world community”.

He recalled that last year, the Assembly endorsed the beginning of substantive work on discussing the responsible conduct of States in information space, noting that a resolution on Combating Cybercrime was adopted at Russia’s initiative.

“It is important to work for achieving legally binding agreements on all aspects of international information security”, Lavrov underscored.

He also saw a need to “step up efforts” to help settle crises globally, advocating as “the main point” to seek compliance with already existing-agreements and not to allow invented pretexts to refuse implementing already negotiated obligations.

“This also concerns conflicts on the post-Soviet territory, including the need to strictly follow the provisions of the Minsk Package of Measures to settle the crisis in the East of the Ukraine”.