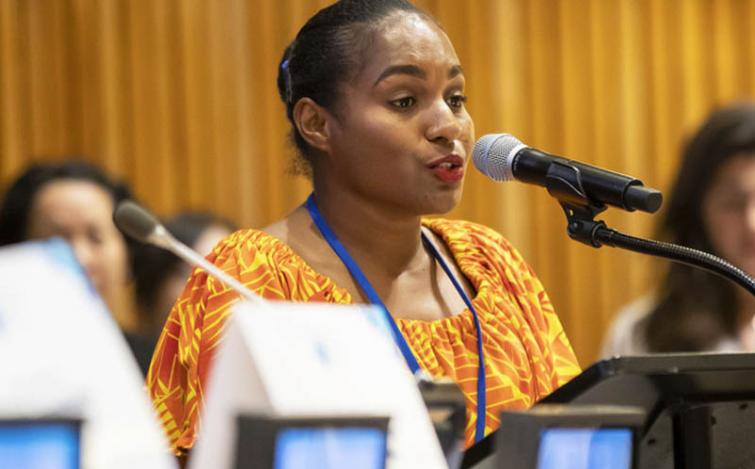 â€˜We may be small islands, but no man is an islandâ€™, Papua New Guinea youth tells world leaders

New York: “All of us from small islands can relate to the word’s perception of us, as small islands”, but rather than treating them as distant vessels, imagine instead “an undivided Pacific, connected by an ocean highway.” That was the plea to world leaders from Vinzealhar Ainjo Kwangin Nen, on Friday, speaking on behalf of her generation, on the front line of climate change.

The young advocate from the island nation of Papua New Guinea, painted a vivid picture of the dangers for delegates on Friday, during the last major summit of the UN’s high level week, dedicated to looking at the progress and pitfalls facing Small Island Developing States (SIDS) as the world warms, and the seas rise.

Speaking from the General Assembly Hall podium, she offered a personal view in poetic form, of the struggles she is dealing with: “I am a youth of a small island, when in a global community, most everyone doesn’t know where I am. And what hurts the most, is I know where they all are”.

Testimonies like Ms. Nen’s received a warm welcome during the event, geared towards addressing climate and development issues unique to island states, and assessing the implementation of priorities laid out in a 2014 mandate, to accelerate SIDS development.

The Small Island Developing States Accelerated Modalities of Action - or SAMOA Pathway, was agreed in September 2014, during the Third International Conference to focus the world’s attention on islands’ special development roles and particular vulnerabilities.

As world leaders gathered for a mid-term review on the plan’s implementation, five years form its adoption, they conceded that progress toward sustainable development for SIDS require a major increase in urgent investment, and the road to stability for many island nations is threatened by amplified environmental challenges, economic crises, food security, and others.

While some progress has been made in addressing social inclusion, gender equality, poverty and unemployment, inequality continues to affect vulnerable groups, and devastating effects of climate change cause lasting loss of life and property.

Putting the plan into action represents “an important chance for the international community to demonstrate solidarity”, Secretary-General António Guterres stressed.

Following in line for comment, President Michael Higgins of Ireland, which sponsored the event, emphasized that “we cannot allow our words in one compartment to be contradictory to another. There must be consistency across the architecture and delivery, most of all the words must be followed by action.”

“This is not academic, this is about life,” he added, highlighting that for island nations “the word ‘disaster’ has a different meaning…as it is a disaster that will come again and again, and therefore response must take account of the danger of recurrence.”

The day-long review comes one month after Hurricane Dorian devastated parts of the Bahamas, adding to the increasing frequency, scale and intensity of natural disasters and their unique threat to island nations and their people.

Keynote speaker and leading Hollywood actor, Jason Momoa said, “I am standing here today because I am ashamed that not all leaders have wanted agreement”, referring the groundbreaking 2015 Paris Climate pledge to limit the globe from warming beyond 1.5 degrees Celsius.

“I have seen how one place can be oblivious to another…with a foothold in two worlds, I began to see how a problem for one can become a problem for all,” said the star of the Aquaman superhero movie, speaking to his background as Hawaiian-born, and Iowa-raised.

A political declaration is expected to come at the summit’s conclusion, a concise action-oriented agreement to further propel the SAMOA pathway’s integration which will require the international community’s support.