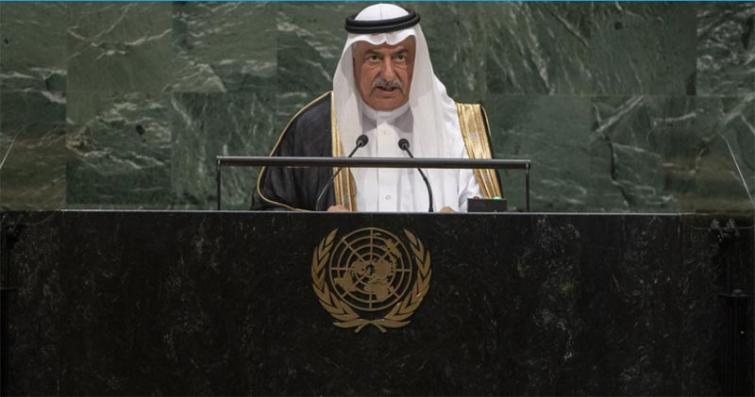 New York: The United Nations, and the world, have a moral responsibility “to apply utmost pressure with every tool available ... to end the terrorist and aggressive conduct of the Iranian regime,” Saudi Arabia’s Foreign Minister told the General Assembly on Thursday evening.

Although he had planned to speak about Saudi Arabia’s ongoing economic development and reforms and other issues, Ibrahim bin Abdulaziz Al-Assaf said that unfortunately, the “reprehensible attacks” against the Kingdom’s oil facilities less than two weeks ago demanded attention and a unified international response.

He said that the firing of 25 cruise missiles and drones that nearly cut oil production in Saudi Arabia by half was “a flagrant violation of international laws and regulations”, as well as “an attack on international peace and security and a significant threat to oil supplies”.

“We invited UN and international experts to pin down the perpetrator,” he said, claiming that “whoever stood behind these attacks is also responsible for other assaults on commercial tankers in the Gulf of Oman, the Abha Airport and the Shaybah oil field.”

He maintained that the perpetrator “is a vile and cowardly regime, which hides behind its affiliated militias” that views his State and its people “only as a battlefield to achieve its subversive agenda”.

The Foreign Minister said, “we have known that regime for 40 years” and that it has carried out terrorist acts inside Saudi Arabia, in Bahrain, Kuwait, Lebanon and Europe.

But the latest attacks and aggression “have exposed the Iranian regime before the entire world”, he stated, calling it “a rogue and terrorist system that continues to threaten international peace and security”.

As such, he saw the attacks as “a real test of the international community’s will”, upholding that the UN and “the entire world” faces a moral responsibility to take a unified position, or an unknown future would befall the region, international peace, energy supplies and the world economy.

“The reality is that this bloodthirsty regime is no longer menacing the peoples of the region only, it is doing so to the whole world”, he stressed.

Activities outside the Kingdom

Al-Assaf suggested the Assembly look into other crimes committed by Iran, such as in Syria where it claimed more than half a million lives.

“The Iranian regime participated in killing the Syrian people, either directly or through its proxies and support for militias like the terrorist Hezbollah”, he said.

Moreover, the Foreign Minister blamed Iran for disrupting a political solution in Yemen by “threatening maritime shipping lanes and blocking the delivery of humanitarian aid”.

Asserting that “this rogue regime” used revenue from the nuclear agreement known as the JCPOA to finance its aggression and terrorist activities, he advised the international community to cut off its finance sources as “the best way to compel the regime to renounce its militias, prevent it from developing ballistic missiles and put an end to its destabilizing activities in the region and the world”.