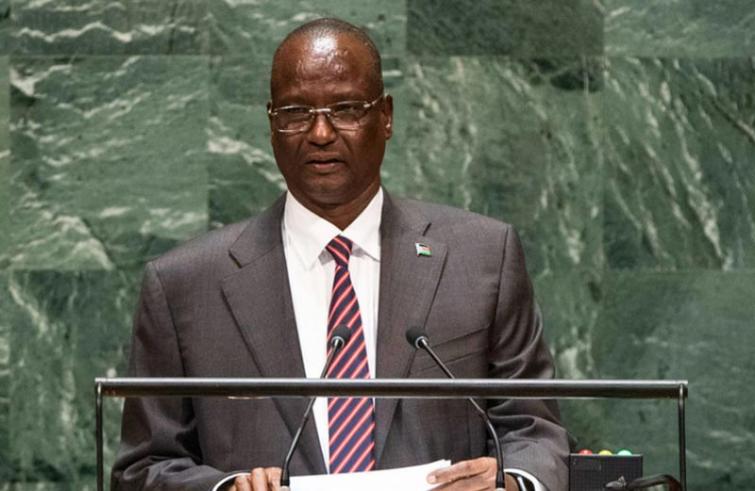 New York: Through the cooperation of the leaders of South Sudan, First Vice-President Taban Deng Gai on Thursday told the United Nations General Assembly that his country could become “a beacon of hope and peace”.

“Last year, I stood here representing a country many skeptics had considered was on the brink of deteriorating into violent conflict,” said Taban Deng Gai, adding that now, “South Sudan is heading towards lasting peace and stability”.

He credited success in the ongoing implementation of the 2018 Revitalized Peace Agreement to the engagement of different parties, and urged the international community to support efforts to bring non-signatories “on board”.

Gai told the Assembly that a face-to-face meeting between President Salva Kiir and Rick Machar earlier this month offered an opportunity to deliberate issues and pave the way for the new Government of National Unity by 12 November.

“The Transnational Government of National Unity will continue to consolidate peace including preparations for elections at the end of the Transnational Period”, he said, calling upon UN Member States “to extend much needed support for the new incoming Government”.

As the Government and parties to the peace accord had worked diligently to implement its provisions, Gai said, the country’s overall security situation is stable.

He elaborated on several peace initiatives under way, including dialogues at grassroots, regional and national levels, which have made “significant strides towards reconciliation and healing” among the country’s diverse communities.

To consolidate peace on the ground, ensure democracy and accountability and fight impunity, Gai believed in a “complementary three-track approach” that included people-to-people peace initiatives, national dialogue and the implementation of the Peace Agreement.

Turning to Abyei,Gai said his Government is “gravely concerned” about the security situation there and urged the Secretary-General to quickly appoint the UN Interim Security Force’s (UNISFA) Civilian Deputy Head.

As Gai congratulated neighbouring Sudan for its ability to amicably resolve the political impasse “that many feared would get out of hand.” He drew a round of applause when he said: “We are one people in two independent countries united through our historical, cultural and social ties”.