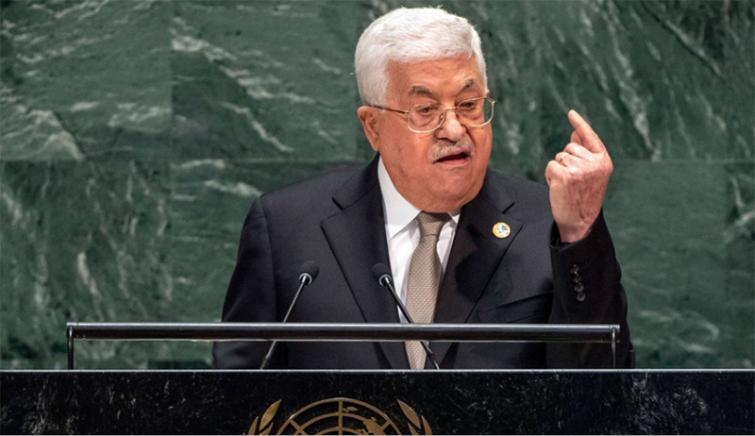 At UN, Abbas rejects Israeli â€˜arroganceâ€™, vows to terminate all agreements if Palestinian territory is annexed

New York: Palestinian President Mahmoud Abbas on Thursday denounced what he called “arrogance and aggression” by the Israeli Government and called on the United Nations to push harder for the two-state solution to resolve the conflict.

In his speech to the UN General Assembly, Mr. Abbas strongly rejected the “arrogant” pre-election announcement by Israeli Prime Minister Benjamin Netanyahu’s of an “illegal plan” to annex and apply sovereignty over the Jordan Valley, the northern Dead Sea and other Occupied Palestinian Territories.

Vowing that if any such plan were carried out, by any Israeli Government, Palestine would terminate all previously signed agreements and relevant obligations.

“What would you do if someone tried…to erase your presence?” he asked the delegations in the Assembly Hall and demanded: “Hasn’t the time come for the emancipation of the Palestinian people and their freedom from this injustice, oppression and occupation?”

Recalling that in 2012 his delegation had received UN Observer status, Mr. Abbas proudly reported that “despite the obstacles and policies imposed by the Israeli occupation and those behind it”, Palestine “is a State party to over 110 international instruments and organizations.”

While accepting international legitimacy and law to resolve its cause, the President maintained that the peace it strives for is “severely endangered” by Israel’s policies and practices in its land, saying “the responsibility” is now “incumbent upon you”.

A ‘reckless’ war in East Jerusalem

On the situation in East Jerusalem, Mr. Abbas lamented that Israel “is waging a reckless, racist war against everything Palestinian”, from demolishing homes to assaulting clergy and legislating racist laws to denying access to holy places.

“I caution against these policies and reckless measures, which will lead to dangerous consequences with unfathomable implications,” he warned, asserting that Palestine “will not surrender to the Israeli occupation regardless of the circumstances and no matter the pain”.

“Let everyone know that occupation cannot bring peace or security or stability for anyone”, he stressed.

Mr. Abbas said is “unfortunate and shocking” that the United States, a permanent member of the UN Security Council, is “supporting Israeli aggression against us – reneging on its international political, legal and moral obligations”.

He cited “extremely aggressive and unlawful measures” the US has taken, such as declaring Jerusalem the capital of Israel, “in blatant provocation” to hundreds of millions of Muslims and Christians.

The Palestine President renewed his call for an international peace conference, saying “we cannot accept that the shepherding of peace be monopolized by one country”.

In closing, he saluted the people in Palestine, in refugee camps and the diaspora across the word with the confident message that the occupation “will inevitably end”.

“The dawn of freedom and independence is coming…a right is never lost as long as someone strives to claim it”, concluded President Abbas.