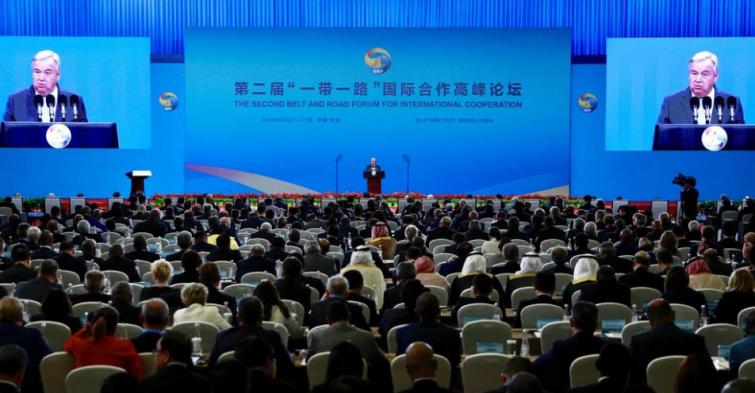 Addressing Chinese President Xi Jinping and dozens of other state leaders at the Second Belt and Road Forum for International Cooperation, Guterres urged the international community to “come together” in mobilizing resources to implement the Sustainable Development Goals (SDGs) and “to stop runaway climate change.”

“China’s leadership on climate action is helping to show the way,” said the UN chief, noting the $125 billion investment made by the Government in 2017, in renewable energy.

He pledged the support of United Nations country teams – which comprise UN agencies, founds and programmes operating in a country - saying the pillars of the Belt and Road Initiative link to the 17 SDGs, which include ending extreme poverty and hunger, and can translate into “real-life progress for people.”

Looking globally, Guterres said that countries today need a way to transition from an “unsustainable, fossil-fuelled grey economy to a clean, green, low-carbon energy future.”That means also helping to close the financing gaps for achieving the SDGs, he said noting the   nearly $1 trillion needed for infrastructure investments in developing countries.

Noting that at least 75 per cent of the infrastructure the world needs by 2050 has yet to be built, Guterres lauded China for its investment in renewable energy job creation and technologies.

“I see the Belt and Road Initiative as an important space where green principles can be reflected in green action,” he told the Forum.

Earlier, noted there was now “a unique opportunity to build a new generation of climate resilient and people-centred cities and transit systems, and energy grids that prioritize low emissions and sustainability.”

While in Beijing, Guterres, who is joined on the visit by Liu Zhenmin, Under-Secretary-General at the UN Department of Economic and Social Affairs (DESA), will meet one-on-one with President Xi and other senior officials. On Saturday, he is due to participate in a roundtable on promoting green and sustainable development.