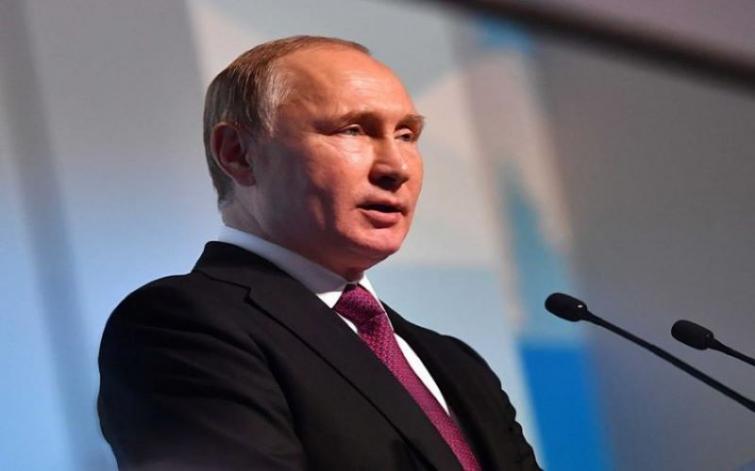 To work out response for unilateral sanctions, Putin calls on global community

Beijing, April 26 (Sputnik): The international community should work out a response to such manifestation of protectionism as unilateral illegitimate sanctions, Russian President Vladimir Putin said on Friday.

"It is important to work out an effective response to the risks of fragmentation of the global political, economic and technology space; to the growth of protectionism with frequently used illegitimate unilateral restrictions or, even worse, trade wars, imposed bypassing the UN Security Council being its most dangerous form," Putin said at the opening ceremony of the Belt and Road forum in Beijing.

Putin argued that the international community should counter such challenges as the slowdown of global economic development, economic inequity between various countries and technological lag.

"I have repeatedly said this and I would like to say once again that these negative tendencies create the breeding grounds for terrorism, extremism and illegal migration; become the reason for fueling of old regional conflicts and emerging new regional conflicts," Putin pointed out.

The president noted that Eurasia was capable of becoming the example of a constructive and positive agenda for the settlement of such issues.

This year’s Belt and Road Forum is being held from Thursday to Sunday. The event is dedicated to Beijing's Belt and Road Initiative which seeks to bring trade and transportation infrastructure development across Asia, Russia, Europe and the Middle East.

Putin arrived in Beijing to attend the international event on Thursday. During his visit, the president is also expected to hold a number of bilateral meetings.