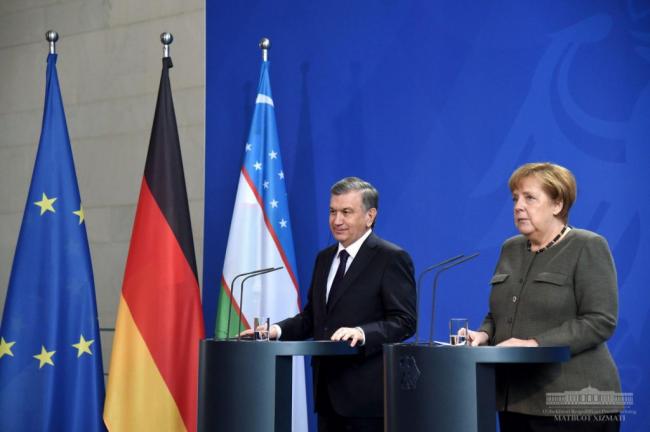 Tashkent, Jan 23 (IBNS): Before the negotiations between the President of the Republic of Uzbekistan Shavkat Mirziyoyev and Federal Chancellor of Germany Angela Merkel, a briefing was held for mass media representatives.

Angela Merkel noted that this visit of the President of Uzbekistan after a long break is important and will give a powerful impetus to development of bilateral cooperation.

"We want to be a reliable partner of Uzbekistan. We see many opportunities for expanding cooperation between our countries, " the Federal Chancellor said.

Shavkat Mirziyoyev expressed deep gratitude for high attention paid to the delegation of Uzbekistan and congratulated everyone on the 70th Anniversary of the Federal Republic of Germany, which will be celebrated in May this year.

The President emphasized that Uzbekistan intends to bring relations with Germany to a qualitatively new, higher level.

The negotiation agenda includes the state and prospects for interaction in politics and security, trade, technologies and innovation, investments, education and culture.

Interest was noted in further close cooperation within the framework of the United Nations, the Organization for Security and Co-operation in Europe and other international structures.

It was emphasized that the new Strategy of the European Union for Central Asia will serve to strengthening bilateral cooperation.

It was announced that at the meeting of the President of Uzbekistan and the Federal Chancellor of Germany, special attention will be paid to strengthening cooperation in the fight against challenges and threats, primarily such as terrorism and extremism. The key issue is the early launch of the peace process in Afghanistan.

Uzbekistan is open to a constructive dialogue in the field of ensuring human rights and freedoms, as well as cooperation in order to achieve transparency in the public administration system and the complete eradication of corruption in Uzbekistan.

The parties expressed their willingness to expand investment and technology cooperation. It was noted that on the eve of the visit of the President of Uzbekistan, a business forum was successfully held, following which agreements were reached on implementation of new projects worth over 8 billion euros, activities continue on other agreements.

The great potential of interaction in the field of secondary, vocational and higher education, expansion of schools’ network with in-depth study of the German language, development of cooperation with leading German universities was also noted.