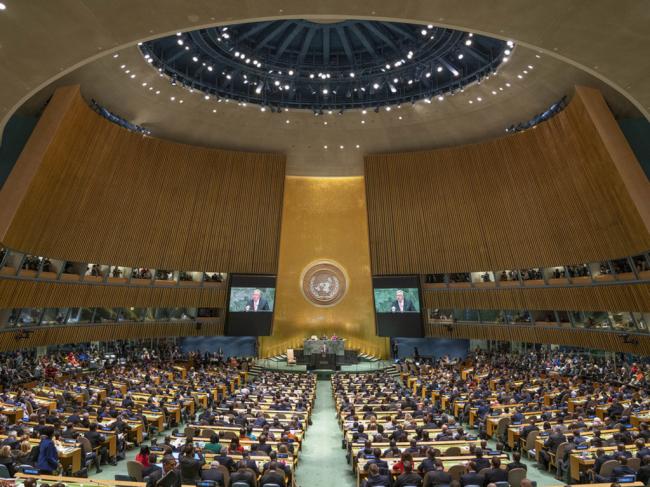 New York, Dec 26 (IBNS): How is the UN tackling its most ambitious and far-reaching project: the 2030 Agenda to “transform the world”? This is the mammoth responsibility of the UN’s General Assembly’s Second Committee – the body which deals with “economic and financial matters”. Here is the second in our series on what happens at the UN when the world leaders have gone home at the end of September, and the Committees get going on turning pledges and ideas into action.

In this, the second in our ongoing series looking at how the headlines generated by the pronouncements of UN officials and world leaders are translated into action, we find out the Committee is breaking down this task.

Many of the topics discussed during the Committee session were relevant to the 17 Sustainable Development Goals(SDGs); that included all aspects of sustainable development, from macro-economic policy, human settlements, the eradication of poverty, and the best use of communications technologies for development.

In recent years, the committee’s work has begun with a keynote address from Homi Kharas, the director of the Global Economy and Development program at the Brookings Institute.

Kharas has an intimate knowledge of the 2030 Agenda, having led the High Level Panel in 2015 which decided what should replace the Millenium Development Goals, the first example of the UN setting specific targets to make the world a better place for all.

The answer was the SDGs, which are grouped in 5 specific themes: people, planet, prosperity, peace and the partnerships that are necessary to make them happen.

In an interview with UN News, he explained that it soon became clear how connected various pieces of the economic agenda are: “all of these different pieces, whether it's alleviating poverty ending hunger, girls' education, environmental issues…what we realized was that they all had to be tackled as a seamless whole, and that's why the committee's work is really so all embracing.”

Getting the international community on the same page

So how does the committee manage to get the representatives from the Member States, the 193 countries of the United Nations, together on the same page?

For this session just ended, that job went to Jorge Skinner-Klée, Guatemala’s Permanent Representative to the United Nations and current Chair of the 2nd Committee.

Skinner-Klée is a career diplomat with over 30 years experience who describes himself as a “specialist in generalities…everything from the bottom of the sea, to outer space and in-between.”

He told UN News that the legacy of the creation of the committees, over 70 years old,is one of the big challenges that he, and other Chairs have to deal with: "there are a lot of anachronisms…that have permeated the agenda and have been there for some time… so many resolutions, and the momentum, come from the past, and now we have to figure out how best to procure resolutions that come into action and play into the SDG agenda.”

In terms of getting the 193 countries to pull in the same direction, Skinner-Klée says that the skill of the Chair is not enough: “It takes political will. So that means reciprocal transactions. There are people [countries] who have vested interests….and the mainstay of the committee is the negotiation that happens between the G77 – which is 134 countries plus China – and, on the other side, the European Union.”

Hopes and fears for the future

Mr. Skinner-Klée says that he is encouraged by the global community’s commitment to the 2030 Agenda over the last three years, but is concerned that the current geo-political climate, which he characterizes as one of “atomization, confrontation and polarization,” will have an impact on his ability to make progress on the items on the Committee’s agenda.

For Homi Kharas as well, the world is carrying all the cards it needs to fulfil the 2030 Agenda, but for various reasons, the international community is moving too slowly: “I think that we have the understanding, the resources, and technology to do much more than is currently being done. But we're also distracted by many factors, and on the international stage we now have far lower levels of international cooperation, including in scientific exchange, than we have had in some time.”

His fears echo those expressed by the UN Secretary-General António Guterres, who has warned that “climate change is running faster than we are – and we are running out of time.” The message from the UN Chief is clear: for the work of the 2nd Committee and the 2030 Agenda to succeed, world leaders need to show more leadership and greater ambition, and avoid “a fate that none of us wants – a fate that will resonate through generations in the damage done to humankind and life on earth.”