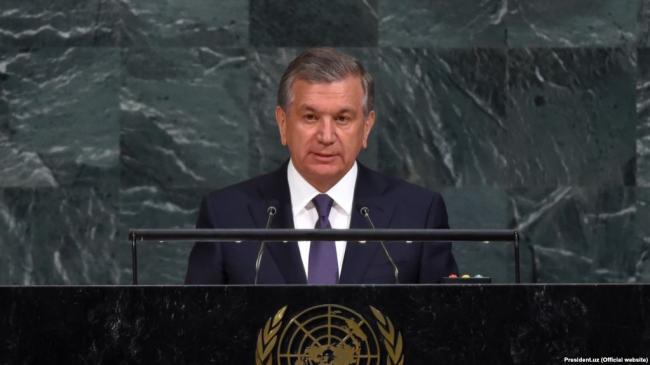 New York, Dec 15 (IBNS): On December 12, 2018, the UN General Assembly has adopted a special resolution “Enlightenment and religious tolerance” at its plenary session. The document, the draft of which was developed by Uzbekistan, was unanimously supported by all UN member states.

The adoption of the resolution became the practical implementation of the initiative of the President of the Republic of Uzbekistan Shavkat Mirziyoyev, forwarded at the 72nd session of the UN General Assembly in September 2017, in New York.

Addressing the 72nd session of the UN General Assembly, Uzbekistan President Shavkat Mirziyoyev noted that the main goal of the resolution proposed by Uzbekistan is “ensuring universal access to education, eliminating illiteracy and ignorance”. The document is intended to “promote the establishment of tolerance and mutual respect, ensuring religious freedom, protection of the rights of believers, and prevention of their discrimination”.

In order to implement this initiative, the Ministry of Foreign Affairs of the Republic of Uzbekistan, together with other agencies, carried out purposeful work on development of the text of the draft resolution and its coordination with all member states of the United Nations.

According to Uzbekistan Permanent Mission to the United Nations in New York, following the results of numerous and comprehensive negotiations with the UN member states on the draft of this document, on December 12, the initiative of the President of Uzbekistan was put into practice. During the plenary session of the UN General Assembly, the resolution “Enlightenment and religious tolerance” was adopted.

It is noteworthy that the resolution was not only unanimously supported by all UN member states, but was also co-authored by more than 50 countries of North and Latin America, Asia, Africa and other continents, which indicates high recognition by the international community of the urgency and timeliness of the initiative of the leader of Uzbekistan.

The resolution adopted at the initiative of Uzbekistan emphasizes the important role of promoting enlightenment, as well as recognizes the importance of integration, mutual respect, protection of human rights, tolerance and mutual understanding in the name of strengthening security and peace in the world.

The document welcomes all international, regional and national initiatives aimed at promoting religious, intercultural and interfaith harmony and combating discrimination against individuals based on religion or belief.

It is noteworthy that the document calls on all member states to intensify efforts for protecting and promoting the freedom of thought, conscience and religion or belief, and in this regard:

a) to promote, through education and other means of mutual understanding, tolerance, non-discrimination and respect in all matters related to freedom of religion or belief, promote in society knowledge of diversity of religions and beliefs, history, traditions, languages and cultures of various religious minorities, existing within their jurisdiction;

b) to support various types of intercultural interaction and peacemaking at the national and international levels;

It should be noted that the goals and provisions of the adopted resolution are fully consistent with the fundamental documents adopted within the framework of the UN, including the UN Charter, the Universal Declaration of Human Rights, the Sustainable Development Goals until 2030, the Declaration on the Elimination of All Forms of Intolerance and Discrimination Based on Religion or Belief, as well as provisions of the traditional UN General Assembly resolutions on this theme.

At the same time, in the resolution adopted by the UN General Assembly, member states are proposed to implement appropriate communication strategies, such as large-scale propaganda in national and international mass media, on the Internet, and disseminate enlightenment information about tolerance, non-violence and freedom of religion or belief.

It should be emphasized that the document calls for intensifying international efforts on promoting global dialogue in order to promote a culture of tolerance and peace at all levels, based on respect for human rights and diversity of religions and beliefs.

In addition, the resolution recognizes the key role of UNESCO in promoting peace and security in the world by expanding cooperation between nations through education, science and culture.

Delegations of Kuwait, United Arab Emirates, Morocco, Oman, Azerbaijan, Panama, the European Union, and a number of other countries spoke in support of the resolution of Uzbekistan at the meeting of the UN General Assembly, who thanked the Uzbek side for initiating such an important and timely document, as well as being open during informal consultations in coordination of its text.

The unanimous adoption of this resolution of the UN General Assembly is a vivid expression and indicator of the full support by the international community of a consistent, deeply thought-out strategy of the President of Uzbekistan aimed at strengthening the atmosphere of cooperation, mutual respect and solidarity of representatives of different nationalities and religions, supporting and maintaining interfaith, inter-ethnic and intercultural dialogue, ensuring peace and harmony in Uzbekistan.