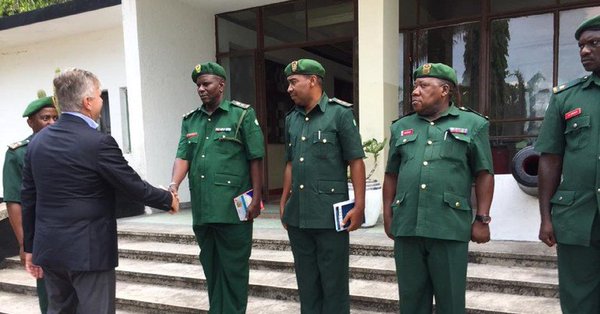 New York, Dec 15 (IBNS): A year on from the brutal killings of 15 United Nations peacekeepers from Tanzania in the Democratic Republic of the Congo (DRC), the head of Peacekeeping Operations (DPKO) paid a visit to some of the victims’ families on Friday, to honour the memory of the soldiers who died in what was the biggest single loss of ‘blue helmets’ in recent history.

Speaking on the island of Zanzibar, home to 13 of the men, Under Secretary-General Jean-Pierre La Croix promised families their loved ones’ service and sacrifice, would never be forgotten.

The peacekeeping chief’s address concludes a two-day visit to the country, where he also met with members of the Tanzanian People’s Defence Force.

On 7 December 2017, suspected Allied Democratic Force (ADF) fighters, a rebel militia based in neighbouring Uganda, ambushed a contingent from the UN Stabilization Mission in DRC (MONUSCO), at its Company Operating Base in Semuliki in the Beni area of North Kivu. A protracted fire-fight ensued between rebels, the UN blue helmets, and Government troops.

The North Kivu region in eastern DRC, has been the site of numerous assaults on UN peacekeeping forces. Two months before rebels struck last December, two other blue helmets were killed in action and another 18 wounded in an attack on their base in the same area.Besides the 15 Tanzanian peacekeepers serving under the blue flag who lost their lives, 44 others were wounded.

Secretary-General António Guterres has called the 7 December killings an indicator of the growing challenges faced by the UN’s peacekeeping operations around the world, and in remarks directly following the attack, he dubbed the deliberate acts “unacceptable” and “a war crime.”

During 2017, more than 110,000 peacekeepers were deployed across 15 missions around the world, and nearly 19,000 UN personnel work in DRC alone, making it the second largest peacekeeping mission behind UNMISS, in South Sudan.

Since its establishment in July of 2010, 154 peacekeepers have been killed, serving with MONUSCO.

In response to regular attacks in the Beni area, MONUSCO and the Congolese armed forces (FARDC) jointly planned offensive operations, which began on 13 November of this year, where the alliance managed to retake key territory from rebel control, in an effort to build a future free from fear.