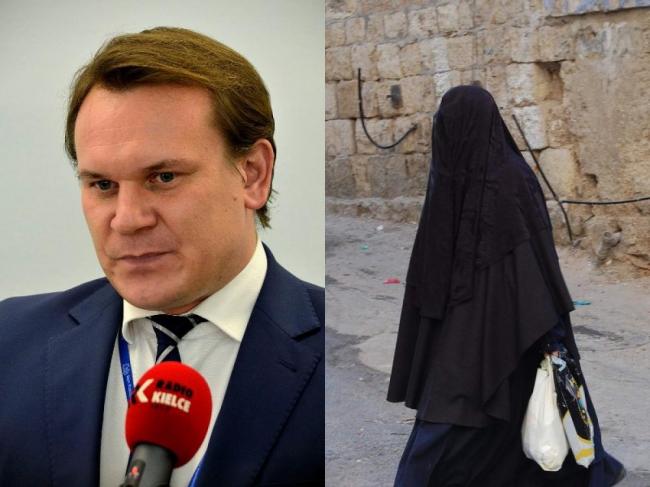 Polish minister says no to burqa; no mosques in Europe until Saudi Arabia allows a church in its vicinity

London, Aug 31 (IBNS): Polish lawmaker Dominik Tarczynski has said that he supports the burqa ban, stepping in the ongoing debate.

He told Breitbart London that Poland should not allow the construction of another mosque, until the European country can build a cathedral in Saudi Arabia, stating the the relationship between the Islamic world and the West is presently unbalanced.

Tarczynski said that Islamic face veils “should be banned in the same way the Christian cross is banned in Saudi Arabia”.

"We’re happy to have it once they agree for Poland to build a cathedral in Saudi Arabia," he said, citing a request made my Saudi Arabia to build a mosque in Warsaw, as an example.

"It’s very simple, either we are equal, we are partners, we are the same human beings — or they feel they are better than others," the Polish minister said.

Throwing his weight behind the burqa ban in a few European countries, he said that it was party due to security reason and partly because of storing parity between the Islamic world and the West.

The burqa, he said, is used as disguise by suicide bombers, child molesters, and armed robbers across the globe.

Countries such as Austria, Belgium, Bulgaria, France, and Denmark have all banned the face veil.

Urging his country to learn from these countries, Tarczynski said: "In Germany and Sweden and many other countries this process, this demand to allow burqas, starts with words like ‘democracy’ and ‘freedom of religion’ and all these beautiful words which have nothing to do with reality… and ends up with suicide attacks."

“Poland should learn from Belgium, France, Germany, and other countries — we cannot copy their mistakes," he added.