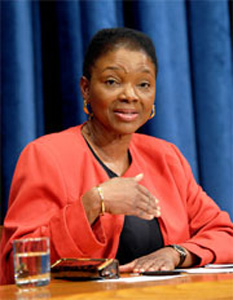 “Humanitarian needs around the world are growing as a result of conflicts, natural disasters and other factors, saidValerie Amos, Under-Secretary-General for Humanitarian Affairs in her remarks at the regional consultation, which South Africa co-hosted with Ethiopia.

“South Africa has the resources and capacity to be a key player in humanitarian assistance on the continent,” she added.

Concluding a two-day visit to South Africa,  Amos, who is also the UN Emergency Relief Coordinator, stressed that the humanitarian needs of people should be at the heart of humanitarian response efforts, and not just an afterthought.

“What do people themselves feel they need?” she asked. “How can we find out and seek to meet most needs rather than imposing solutions?”

Eastern and Southern Africa is the third of eight world regions to hold consultations, following consultations held in the West and Central Africa region in June and in North and South-East Asia in July. The results and recommendations will feed into the World Humanitarian Summit in Istanbul in 2016, to be convened by the UN Secretary-General, and which will aim to set the agenda for future humanitarian action.

While in South Africa,  Amos signed an agreement with Dr. Stergomena Lawrence Tax, Executive Secretary of the Southern Africa Development Community (SADC). At the regional consultation,  Amos said the agreement aims to strengthen the partnership between the UN Office for the Coordination of Humanitarian Affairs (OCHA) and SADC on regional disaster preparedness and response.

Amos also met with representatives of the private sector to explore ways of working together more closely on humanitarian response.