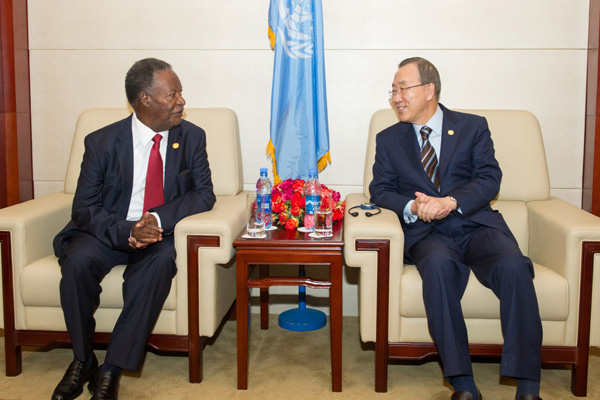 President Sata died on 28 October while receiving treatment at a hospital in London.

In a statement from his spokesperson,  Ban expressed his sadness over President Sata’s passing and extended his deepest condolences to his family, the Government and the people of Zambia.

Noting that Zambia was celebrating its 50th year anniversary of independence and of its membership to the UN,  Ban fondly recalled his visit to the country in 2012 and added that Zambia had a “long record of smooth and orderly presidential transitions.”

“The United Nations will continue to support Zambia in its efforts to promote inclusive development and democratic rule,”  Ban said.

Secretary-General Ban Ki-moon (right) meets with President Michael Chilufya Sata of Zambia in Addis Ababa, Ethiopia, where they were attending the African Union Summit on 26 May 2013. UN Photo/Eskinder Debebe