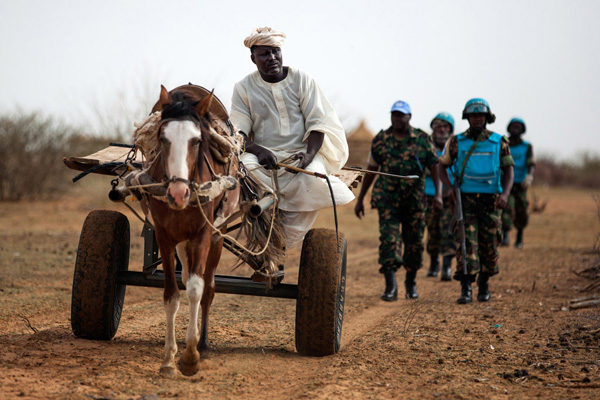 In a statement released on Wednesday by his spokesperson,  Ban said he will take “all necessary steps to ensure full and accurate reporting by [the joint mission],” so that sensitive information is systematically brought to the attention of UN Headquarters and the Security Council in a timely manner. The review team examined material related to 16 incidents, which were the basis of the allegations related to the hybrid operations, known as UNAMID. The team also interviewed former and current staff in UNAMID and at UN Headquarters. While the review did not find any evidence to support the allegations, it did find a “tendency to under-report unless absolutely certain of the facts,” the Secretary-General said. Recognizing that UNAMID faces “unique challenges” owing to its complex mandate and operating environment,  Ban stressed that “keeping silent or under-reporting on incidents involving human rights violations and threats or attacks on UN peacekeepers cannot be condoned under any circumstances.” In five of the cases examined, the review found that UNAMID did not provide UN Headquarters with full reports on the circumstances surrounding those incidents, which involved possible wrongdoing by Government or pro-Government sources. The review team also found that UNAMID took an “unduly conservative approach to the media, maintaining silence when it could have developed a press line, even in the absence of all the facts,” the Secretary-General said.  Ban said in UNAMID’s media policy will be re-examined to ensure greater openness and transparency. In addition, the Mission will be expected to follow up formally and report on Government investigations into incidents where peacekeepers have been killed or injured. In July, the Secretary-General called for a review by the UN Secretariat of all investigations and inquiries related to the hybrid operation undertaken since mid-2012, in order to ensure that the recommendations had been implemented and that any relevant issues had been fully addressed. UNAMID, formally established in 2007, has been mandated to protect civilians, support humanitarian assistance, monitor and verify implementation of agreements, contribute to the promotion of human rights and the rule of law, and assist in the political reconciliation following the 2003 civil war between the Government of Sudan and militias and other armed rebel groups.

A farmer in Karbab, South Darfur, rides his cart while Tanzanian troops from the African Union-UN Hybrid Operation in Darfur (UNAMID) arrive at the village as part of a routine patrol. UN Photo/Albert González Farran