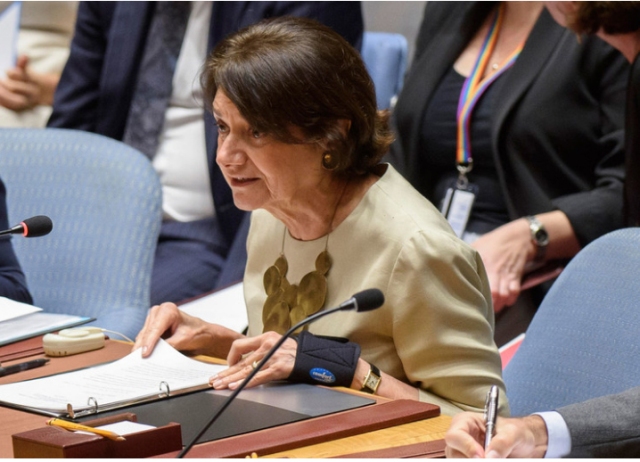 Rosemary DiCarlo briefed the 15 ambassadors on developments over the past months, during which there has been an escalation in incidents between Israelis and Palestinians.

She added that the humanitarian situation in Gaza had also further deteriorated, though the re-opening of the only commercial goods crossing into the Strip was welcome.

Gaza has been under blockade for more than a decade after the militant group Hamas gained control of the enclave.

Israel closed the Kerem Shalom crossing into Gaza in July in response to Palestinians launching incendiary kites into its territory.  Though it became operational again this month, another crossing for pedestrians has been shuttered except for humanitarian cases.

“As we work towards a full lifting of the closures on Gaza, in line with Security Council resolution 1860 (2009), I call on all parties to ensure that urgently needed humanitarian supplies reach the Strip. These should not be held hostage to political and security developments,” DiCarlo said.

“I also reiterate previous calls by the Special Coordinator (the UN’s Nickolay Mladenov) to Hamas to provide full information on the Israeli nationals who are being held in Gaza, as required by international humanitarian law.”

Turning to Gaza’s “crumbling” infrastructure, Ms. DiCarlo reported that the UN is increasing its capacity to better support projects in the areas of energy, water, health and job creation.

However, she expressed concern that funding for UN emergency fuel, which sustains roughly 250 critical facilities in the enclave, had run out, while essential medicine stocks were dangerously low.

Additionally, the UN agency that assists Palestinians, UNRWA, has also been facing a cash crunch.

“The Secretary-General has warned that failing to address UNRWA’s remaining $217 million funding shortfall will have serious humanitarian and developmental consequences, as well as implications for regional stability,” she stated.

The political affairs chief reported that 13 Palestinians were killed by Israel forces in continued protests near the Gaza border fence, while 1,000 others were injured together with an Israeli soldier.

This week, the Israeli authorities announced that military police investigations will be held into the deaths of two Palestinians killed at the fence.

“While Israel has a duty to protect its citizens, it must exercise maximum restraint in the use of live fire, and refrain from using lethal force, except as a last resort. I further call on Hamas to avoid violence at the fence and refrain from putting children in harm’s way. Children should never be targeted or instrumentalized in any way,” she said.