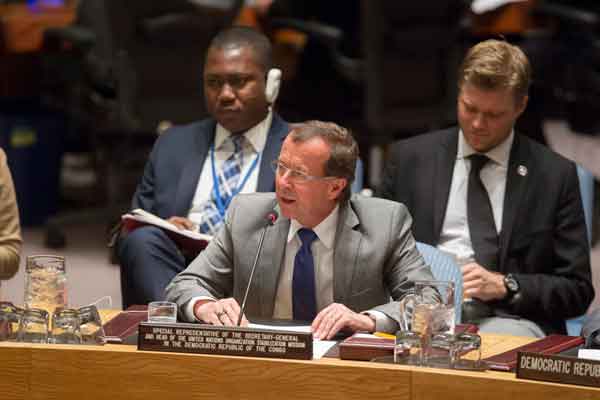 India Blooms News Service | | 28 Oct 2014, 04:14 pm
#DR Congo
New York, Oct 28 (IBNS): Amid continuing flare-ups of deadly violence and a tenuous humanitarian situation in the Democratic Republic of the Congo (DRC), the head of the United Nations peacekeeping mission (MONUSCO) in the vast African nation today underlined the need for a â€œproactive, not reactiveâ€ response in countering the countryâ€™s rebel groups and boosting protection for civilians.

In his briefing to the Security Council, Special Representative Martin Kobler noted that despite initial hopes that “the seeds of peace” would spread throughout the DRC’s Eastern regions, recent outbursts of violence in villages in and around the city of Beni had reminded the world “just how fragile those hopes can be.”

Mr. Kobler was referring to a series of massacres committed by the Ugandan-based Allied Democratic Forces (ADF) rebels between 2 October and 17 October during which they “brutally massacred” over 80 civilians, mostly women and children, with machetes.

The Special Representative cautioned that although the ADF had been weakened over the past few months as the Congolese Armed Forces (FARDC) captured strongholds and released hostages held by the rebels, they nonetheless continued to resist the Government forces.

“These lamentable attacks, however, demonstrate the group’s resilience and their capacity to use asymmetric guerrilla and terrorist tactics against civilians,” Mr. Kobler explained.

“Under pressure and on the run, they may be trying to draw FARDC attention away by attacking population centres,” he added.

Indicating a two-point plan to combat the ADF resurgence, Mr Kobler told the 15-member Council that “only action against the ADF, not words” would serve to revive the population’s confidence in the Government forces and in the UN presence in the country as “no victory is possible without the support of the local population.”

Secondly, he said, he “strongly advocated” for decisive joint military and combat operations between the FARDC and MONUSCO in order “to bring an end to this scourge.”

Mr. Kobler acknowledged that some of his mission’s focus on the ADF may have been diverted as MONUSCO continues to labour towards the neutralization of the Democratic Forces for the Liberation of Rwanda (FDLR) armed group – among the mission’s long-stated “top priorities.”

Leaders and members of the FDLR are among the perpetrators of the 1994 genocide against the Tutsi in Rwanda, during which Hutu and others who opposed the genocide were also killed, the Council recalled in arecent statement. Indeed, the FDLR is a group under UN sanctions and which has continued to promote and commit ethnically based and other killings in Rwanda and in the DRC.

He recalled that the FDLR had until 2 January, 2015 to voluntarily disarm, after which military action against the group would be “inevitable.” He warned, however, that “taking this fight to the jungle will be long and difficult” and would result in “many casualties” but that there would be “no excuse for further delay” for the disarmament. “The credibility of the UN, the Congolese Government and the region are at stake.”

Picking up that thread, Saïd Djinnit, UN Special Envoy for the Great Lakes Region, agreed, urging the wider UN to “act now” in reigning in the FDLR.

“Failure to bring the process of neutralization of the FDLR to a successful conclusion in line with the resolutions of the Security Council and the decisions of the leaders of the region will potentially exacerbate tensions, undermine our collective credibility and put the PSC Framework under serious stress,” said Mr. Djinnit, referring to the Peace, Security and Cooperation Framework for the DRC signed by 11 African countries in February 2013 with the aim of building stability by addressing the root causes of the conflict and fostering trust between neighbours.

Meanwhile, turning to the humanitarian situation in the country, Mr. Kobler said that the province of Katanga had been plunged into a humanitarian crisis as internally displaced persons had increased more than 11-fold over the past three years. He warned that as the country was soon expected to head to the polls, the elections themselves could be “a flashpoint,” further exacerbating humanitarian conditions.

“Never-before-held local polls may add fuel to the fire of traditional rivalries and conflicts over land and customary power,” he explained, adding that at the national level “some may be tempted to subvert democratic competition.”

At the same time, the human rights situation in the country remained of primary concern to MONUSCO, Mr. Kobler continued, noting that his office’s work advocating for and protecting the rights of the Congolese people was not undertaken to weaken or blame the Government but to “strengthen good governance,” promote “long-term stability,” strengthen the Government’s moral authority, and open-up dialogue so that “all pending human rights questions can be discussed and confidence can be built.”

On that note, the Special Representative observed that the protection of civilians and their human rights must also be enforced by MONUSCO’s military component.

“The Force Commander and I agree that the Protection of Civilians is more than a mandated task,” Mr. Kobler told the Council. “It is our raison d’etre in the DRC and a moral imperative of the UN.”

He affirmed that the UN’s presence in critical areas of danger was “not enough” and that “presence without action, in the face of violence, undermines our credibility.” To that point, he called on MONUSCO troops to engage with civilians, “pursue the danger where it lies,” and “march for days into the jungle,” if necessary, in order to guarantee the protection of civilians.