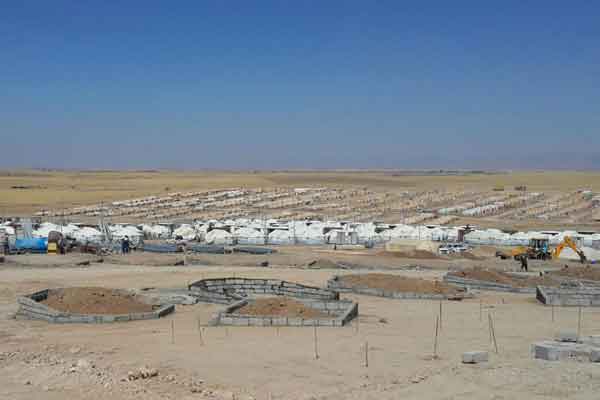 | | 28 Oct 2014, 03:48 pm
#harsh winter
New York, Oct 28 (IBNS): Senior officials from the United Nations and the Organization of Islamic Cooperation (OIC) warned today that an â€œimmenseâ€ humanitarian crisis is unfolding in Iraq and called for greater resources from the international community to help with the upcoming winter season, as they concluded a four-day mission to conflict-riven areas in the country.

“We were able to see for ourselves the magnitude of the crisis,” said Rashid Khalikov, Director in Geneva of the UN Office for the Coordination of Humanitarian Affairs (OCHA), in a press briefing at the end of a 20 to 23 October mission to Iraq. “An immense humanitarian emergency is unfolding in front of our eyes,” he added.

As part of the mission, Mr. Khalikov, along with Hesham Youssef, Assistant Secretary-General for Humanitarian Affairs for the OIC, visited Erbil, Baghdad and Dohuk Governorate in Iraq, and met with civilians, authorities and humanitarian partners.

Among the areas visited was the Kurdistan region, which bears the brunt of the displacement crisis, with more than 850,000 displaced people. The officials also went to Dohuk Governorate, where more than half a million people have sought refuge and 90,000 live in the open.

Winterisation and shelter are among the top priorities, the officials stressed, along with more resources to ensure a wider coverage for the 800,000 people who are in urgent need of shelter. Current winterisation activities include distribution of core relief items, blankets, kerosene, heating stoves, jerry cans, mats, and insulation to make tents warmer and more resistant to the winter.

Since January, some 1.8 million people – half of them children – have been displaced in Iraq, and hundreds of thousands more have been forced to find shelter in unfinished buildings, public spaces and informal settlements, Mr. Khalikov said. In total, there are 5.2 million Iraqis in need of assistance.

As a result of the difficulties in finding shelter, Mr. Youssef noted, there are 400 schools in Kurdistan that are hosting internally displaced people, which has led to the postponement of the school year to 1 December for those schools.

Further, he said that the two officials had visited the Turkish-Iraqi border “where refugees were coming from [Kobane] on a daily basis – around 12,000 refugees so far in the last two weeks or so.”

In recent months, Iraq has been increasingly riven by conflict, terrorism and a swelling refugee crisis contributing to the Middle Eastern country’s deteriorating humanitarian situation.

The joint mission comes on the heels of the Strategic Response Plan, which was launched this past week and requests $2.2 billion to cover the humanitarian and protection needs of displaced Iraqis by the end of December 2015.

With rainy season started, and winter on doorstep, UNHCR, together with partners, and support from Kuwait, hurries finishing construction of Khanke camp for displaced people from Sinjar area. Photo: UNHCR Iraq