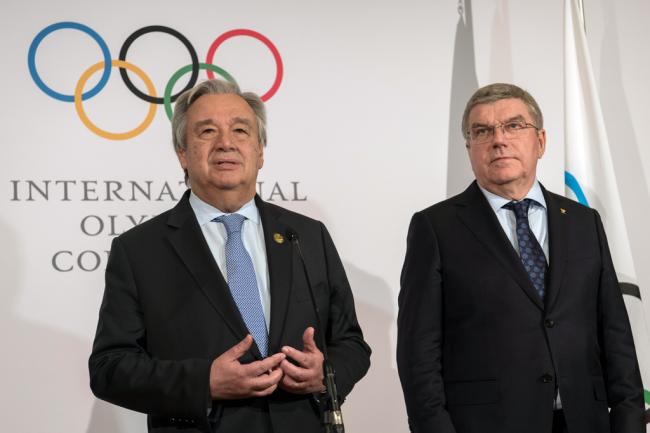 New York, Feb 10 (JEN): As the world comes together for the Winter Olympics, which kicked off Friday in Pyeongchang, Republic of Korea, United Nations Secretary-General António Guterres called on everyone to recognize and promote the Games’ universal message of peace and tolerance.

“The Olympic spirit allows people to be together, from all over the world, to respect each other, to assert the values of tolerance, of mutual understanding that are the basic elements for peace to be possible,” Guterres told journalists in Pyeongchang.

“It is universal. It’s for the world. It is valued in Korea as it is valued everywhere where we struggle to try to address the many complex conflicts that we are facing,” he said.

The Winter Olympics opened earlier today (local time) with cultural and artistic performances as well as the customary parade of athletes, which was the delegations from the Democratic People’s Republic of Korea and the Republic of Korea under one flag, carried together by a sportsperson from each team.

Also today, the opening ceremony saw the conclusion of the long journey of the Olympic Torch that started in November 2017.

Outlining the commonalities between sport and diplomacy – both about peace and bringing people together – LajÄák highlighted that the Olympic torch is “probably the best symbol in our times in our world.”