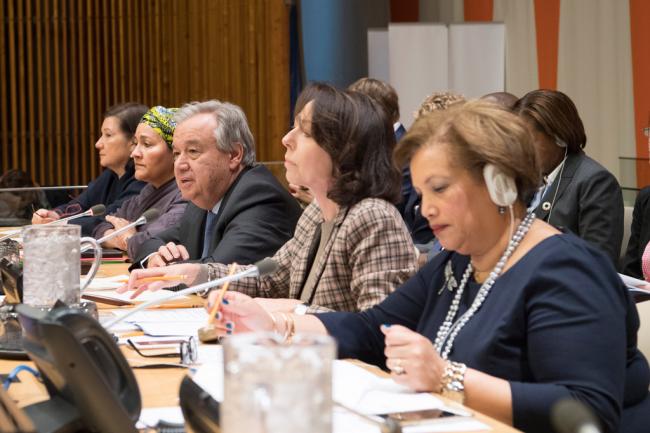 New York, Jan 23 (JEN): Sustainable development is a fundamental human right and humanity’s best chance for a future of peace and prosperity, United Nations Secretary-General Antonio Guterres said Monday, laying out the case for Agenda 2030 to be at the centre of UN activities.

Guterres underscored that to implement the 2030 Agenda for Sustainable Development – an action plan including 17 goals to ensure that all people live in peace, security and dignity on a healthy planet – adopted by UN Member States in 2015, strategic choices needed to be taken between an evolutionary approach and a more ambitious pathway.

“We chose the path of ambition,” he told a meeting of the Economic and Social Council (ECOSOC ), adding: “In a rapidly changing world, we cannot afford to have a slowly reforming UN development system […] we must act.”

The UN chief stressed that reforms are necessary because “business as usual” approaches simply will not provide countries with the support they need to achieve the Sustainable Development Goals (SDGs) or meet the Paris Agreement commitments on climate change.

He laid out seven keystone reform proposals for better coordination, transparency and accountability, beginning with a new generation of demand-driven UN country teams, equipped with skillsets tailored to country-specific development priorities and needs.

The second proposal was a reinvigorated Resident Coordinator system, “with stronger capacity, leadership, accountability and impartiality.”

Thirdly he proposed “a coordinated, reprofiled and restructured regional approach to better support work on the ground.” The fourth reform would be for renewed spaces for Member States to guide system-wide actions, bringing greater transparency and accountability at the country level.

“I would also like to see a strengthened ECOSOC, empowered to hold the system accountable and challenge us to do more, together,” he added.

A stronger UN institutional response and approach to partnerships for the 2030 Agenda was the fifth proposal, and the sixth was concrete steps to accelerate the UN system’s alignment to that blueprint.

“A Funding Compact to bring better quality, quantity and predictability of resources, increased accountability and transparency and enhanced capacities of the system to deliver on the 2030 Agenda,” was his final proposal.

Member States in the driver’s seat

A common theme running through the proposals is a “rock-solid commitment” to reinforce national leadership and ownership for sustainable development.

“Member States will be in the driver’s seat and the 2030 Agenda will be the driving force,” he stated.

According to the Secretary-General, funding the core capacities of the Resident Coordinator system through assessed contributions “would be a logical step as the Organization repositions sustainable development at the heart of its work.”

He held sway that about one per cent of annual contributions allocated to operational development activities would bring value for money by yielding a more robust coordination function, significantly improving effectiveness and strengthening leadership and system accountability.

Calling effectiveness, efficiency, results for people and value for money “our shared goals,” Guterres said delivering was “our shared responsibility.”

“At the same time,” he stressed “we will continue to take all possible measures, within existing mandates, to lay the groundwork for precisely what you seek: a repositioned system, reinvigorated by a more impartial and accountable coordination system for sustainable development.”