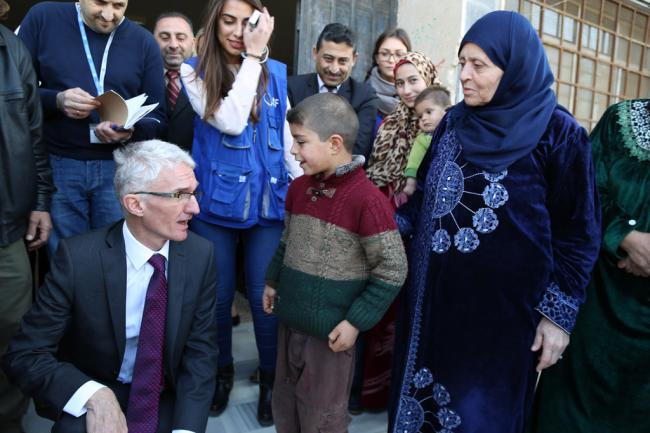 New York, Jan 12 (JEN): After seven years of bloody conflict, the Syrian war has wreaked a “colossal toll” on the country and its people, the United Nations relief chief said on Thursday from the capital, Damascus, where he outlined ways to sustain and improve humanitarian assistance and protection for everyone affected by the crisis this year.

“I have this week seen first hand the colossal toll that the brutal and sustained hostilities have taken,” said Mark Lowcock, the UN Emergency Relief Coordinator, in a statement to the media on the third day of his visit to Syria.

Describing the dire situation, he said estimates suggest that hundreds of thousands of people have been killed, countless more are missing or detained, and five million have fled to other countries. Gross domestic product (GDP) is less than half what it was before the war, and replacing destroyed infrastructure and housing will cost hundreds of billions of dollars.

Against this background, he paid tribute to the thousands of aid workers that have worked to implement assistance programmes, explaining: “Most of them are Syrians and many are volunteers, working for the organizations of the UN, the Red Cross, [non-gorvnermental organizations] and the Syrian Arab Red Crescent.”

While in Syria, Lowcock, who is also the UN Under-Secretary-General for Humanitarian Affairs, said he has had open discussions with the Government about the crisis and what more needs to be done to reduce humanitarian suffering, and has also met local authorities, the diplomatic community and humanitarian organizations.

He said he is hoping soon to see “a number of positive developments” that enable the UN to sustain and improve the aid effort this year.

Such developments would include finalization of the UN’s humanitarian response plan for 2018, which seeks $3.5 billion from donors to meet the needs of more than 13 million people in all parts of Syria, as well as agreement to medical evacuation for hundreds of critically ill people trapped in besieged Eastern Ghouta.

The UN’s humanitarian response plan for Syria, which targets some 13 million people and is one of the world’s largest sustained emergency aid efforts, totalled $1.7 billion in 2017.

Also, agreement to three or four UN and Syrian Arab Red Crescent convoys each week across front lines would provide assistance to up to 2.5 million people in besieged and hard to reach areas.

Further, the aid effort could be improved through agreement on UN-supported convoys from Damascus to Rukban in south-eastern Syria, and more effective arrangements to enable the UN to support the work of Syrian non-governmental organizations (NGOs), and to enable international NGOs to play a stronger role in relieving the suffering.

Lowcock said he also discussed with the Government and others a number of other issues, including the review of the cross-border aid programmes from neighbouring countries into Syria which was commissioned last month by the Security Council.

“My mandate is to ensure humanitarian assistance and protection for everyone who needs it, in accordance with the long-established principles of independence, impartiality and neutrality which have been endorsed by all the Member States of the UN,” he said.