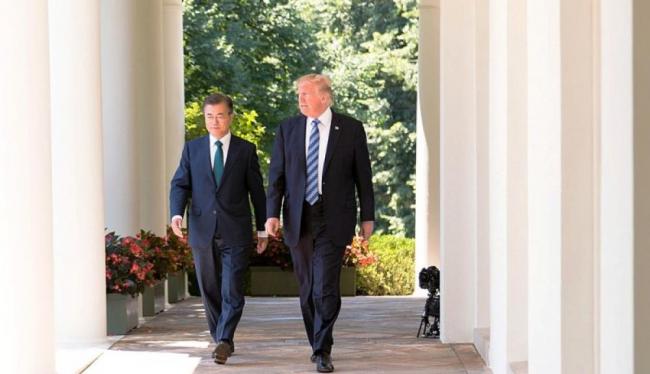 Moon was quoted as saying by BBC: "I think President Trump deserves big credit for bringing about the inter-Korean talks."

"It could be a resulting work of the US-led sanctions and pressure," he was quoted as saying by the BBC website.

In a major development, North Korea said on Tuesday that it will be sending delegates to South Korea for the upcoming Winter Olympics, reports said.

Welcoming the progress made during Tuesday's high-level inter-Korean talks in the small border village of Panmunjom, United Nations Secretary-General António Guterres spotlighted, among others, the agreement to reopen military channels as critical to reducing tensions in the region.

“The Secretary-General [has welcomed] particularly the agreement to work to ease military tensions, hold military-to-military talks, and reopen the inter-Korean military hotline,” said a statement from UN Spokesman Stéphane Dujarric, who added that the re-establishment and strengthening of such channels is critical to lowering the risk of miscalculation or misunderstanding and to reduce tensions in the region.

Guterres also welcomed the decision of the Democratic People's Republic of Korea (DPRK) to send a delegation to the Olympic Winter Games, which will be held from 9 to 25 February in PyeongChang, Republic of Korea.

“As the United Nations General Assembly has recognized, the holding of the Olympic Games can foster an atmosphere of peace, tolerance and understanding among nations. This is particularly relevant on the Korean Peninsula and beyond,” the statement said.

The Secretary-General seized the opportunity to acknowledge other efforts that have contributed to reducing tensions. “He hopes such engagement and efforts will contribute to the resumption of sincere dialogue leading to sustainable peace and denuclearization on the Korean Peninsula,” the Spokesman concluded.