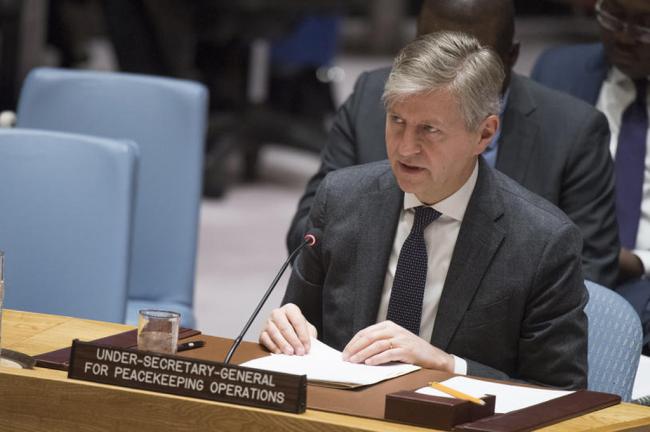 New York, Jan 10 (JEN): Political brinkmanship and a refusal to compromise will only result in further delays in preparations for elections and deepening of the political crisis in the Democratic Republic of the Congo (DRC), which has been gripped by a recent spate of violent protests, the United Nations peacekeeping chief told the Security Council Tuesday.

In a briefing to the Council, Jean-Pierre Lacroix, the Under Secretary-General for Peacekeeping Operations, said that despite significant progress in preparations for elections, the implementation of the 31 December 2016 political agreement remains only partial.

That agreement – facilitated by Conférence Episcopale Nationale du Congo (CENCO) mediators – allowed President Joseph Kabila to stay in power beyond the end of his term and stipulated that peaceful, credible and inclusive elections would be organized in the DRC by the end of December 2017.

On Tuesday,  Lacroix condemned the violent repression of the demonstrations by Congolese National Security Forces, and called on national authorities to carry out the necessary investigations to bring to justice alleged perpetrators of human rights violations.

“Given the stakes, it is essential that all players in the Congolese political class renounce any act that may lead to situations of violence,” he said, urging political actors to play a constructive role in the implementation of the electoral calendar, warning that any refusal to compromise would only deepen the political crisis.

Lacroix also deemed it imperative for the DRC's partners to provide sufficient political, logistical and financial support for the conduct of credible elections, noting in particular that any delay would not only risk fueling political tensions but would also aggravate an already fragile security situation.

In this context, he told the Council that in recent months, armed groups in eastern DRC have launched repeated attacks on positions of the Congolese Army, with a severe impact on the civilian population.

Turning to his recent visit to Semuliki, where an attack on a base of the UN Organization Stabilization Mission in the Democratic Republic of the Congo (MONUSCO) by suspected members of the Allied Democratic Forces (ADF) killed 15 Tanzanian peacekeepers and wounded 43 others. He noted that the Secretaryâ€‘General had appointed former Assistant Secretaryâ€‘General Dmitry Titov to lead a special investigation into the circumstances surrounding the incident.

Meanwhile Lacroix announced that preparations were under way to ensure the deployment next month of a third rapid deployment battalion. He said members of such units were training in jungle combat to enable them to evolve more effectively in the asymmetrical environment in which they operate.

He went on to stress that the asymmetrical nature of the threats posed by ADF rebels and other armed groups called for strengthening regional cooperation, as well as information gathering and analysis, but also to interrupt the political and economic support systems enjoyed by the group. In addition to targeted military operations, he called for strengthening cooperation between MONUSCO and the national Congolese security forces, known by the French acronym, FARDC.