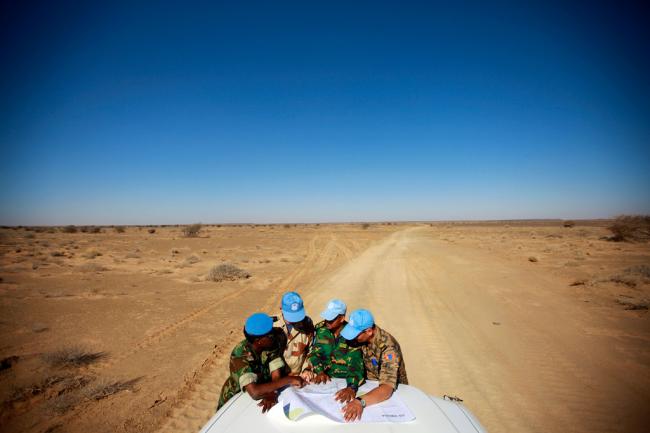 New York, Jan 7 (JEN): Deeply concerned over rising tensions near Guerguerat in the buffer strip in southern Western Sahara between the Moroccan berm and the Mauritanian border, United Nations Secretary-General António Guterres on Saturday called for maximum restraint in the area.

According to a statement from a UN spokesperson, the Secretary-General underlined that the withdrawal of Frente Polisario (Polisario Front) elements from Guerguerat in April 2017, together with the earlier withdrawal of Moroccan elements from the area, was critical to creating an environment conducive to the resumption of dialogue under the auspices of his Personal Envoy Horst Kohler.

“[ Guterres] calls on the parties to exercise maximum restraint and to avoid escalating tensions. Regular civilian and commercial traffic should not be obstructed and no action should be taken, which may constitute a change to the status quo of the buffer strip,” the statement concluded.

Western Sahara is located on the north-west coast of Africa bordered by Morocco, Mauritania and Algeria. The colonial administration of Western Sahara by Spain ended in 1976. Fighting later broke out between Morocco and the Polisario Front. A ceasefire was signed in September 1991.

The UN mission, known by its French acronym, MINURSO, was deployed that year to oversee a ceasefire and a UN settlement plan; however, disagreements between the Government of Morocco and the Polisario Front prevented the holding of the anticipated referendum on the territory's future.

A revised settlement plan proposed by the United Nations after seven years of diplomatic consultations was rejected by one of the parties in 2004.

In 2017, the UN Security Council affirmed its full support for the commitment of the Secretary-General and his Personal Envoy towards a solution to the question of Western Sahara.

In this context, the Council requested Kohler to relaunch the negotiating process with a new

dynamic and a new spirit leading to the resumption of a political process with the aim of reaching a mutually acceptable political solution, which will provide for the self-determination of the people of Western Sahara in the context of arrangements consistent with the principles and purposes of the Charter of the United Nations.

The Council also emphasized the importance of the commitment of Morocco and the Polisario Front to continue the process of preparation for a fifth round of negotiations while also encouraging the neighbouring countries, Algeria and Mauritania, to make important contributions to this process.