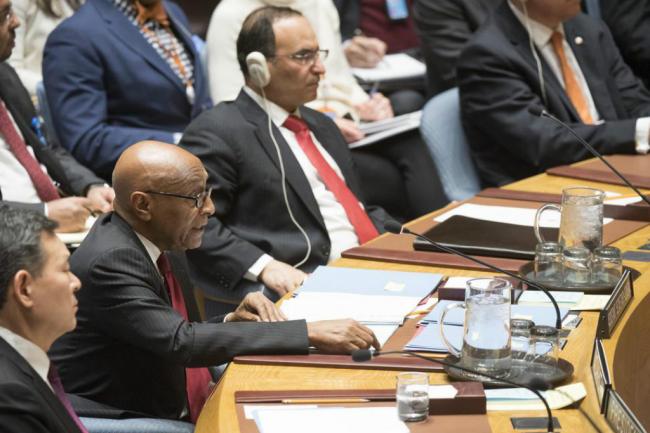 In wake of violent protests in Iran, UN Security Council meets to take stock of situation

New York, Jan 6 (JEN): Even though days of anti-Government protests across Iran appear to have ebbed, a senior United Nations political official said Friday the UN will continue to monitor the situation and engage with Iranian authorities on addressing the legitimate concerns of the population through peaceful means.

“The Secretariat will continue to […] engage Iranian authorities with a view to addressing, as the Secretary-General underscored in his statement of 3 January, the legitimate concerns of the population through peaceful means and avoid violence or retribution against peaceful protestors,” Tayé-Brook Zerihoun, the Assistant Secretary-General for Political Affairs told a Security Council meeting this afternoon.

He briefed the Council on the situation since demonstrations broke out on 28 December 2017 when hundreds of Iranians gathered, in a largely peaceful manner, in Mashhad, the country’s second-largest city, chanting slogans against economic hardship.

“According to reports carried by official Iranian media, more than 20 Iranians, including a teenage boy and a policeman, have died during the protests,” said Zerihoun, adding that Iran’s Ministry of the Interior stated that over 1,000 protesters have been detained, although many may have since been released.

Demonstrations took place in other urban centers, including the capital, Tehran, as well as in many rural areas. Some of the slogans also expressed disappointment at the slow or limited change in social constraints and political freedoms, and criticized what the protesters see as the privileged position of the clergy and elements of the country’s security establishment, reported Zerihoun.

“As the demonstrations intensified, some became violent,” he said, but noted that the UN has a very limited presence in Iran and could neither confirm nor deny the extent of the violence.

Zerihoun told the Council that on 31 December 2017, Iranian President Hassan Rouhani told a Cabinet meeting that the Iranian people should be allowed “space” to protest and criticize the government. At the same time, he stressed that violence would not be tolerated.

Two days later, on 2 January, Supreme Leader Ayatollah Khamenei accused Iran’s enemies, without naming them, of “stirring” the unrest. On 3 January, the Permanent Representative of Iran to the United Nations wrote to the Secretary-General, accusing the United States of stepping up “its acts of intervention in a grotesque way in Iran’s internal affairs under the pretext of providing support for sporadic protests” in Iran, he recalled.

He went on to say that also on 3 January, the Iranian Revolutionary Guards announced the end of anti-Government protests. Recent reports indicate smaller and more dispersed protests. Meanwhile, from 3 to 5 January, large pro-Government rallies were reported across the country, with participants expressing their support for the Supreme Leader and condemning the violence.