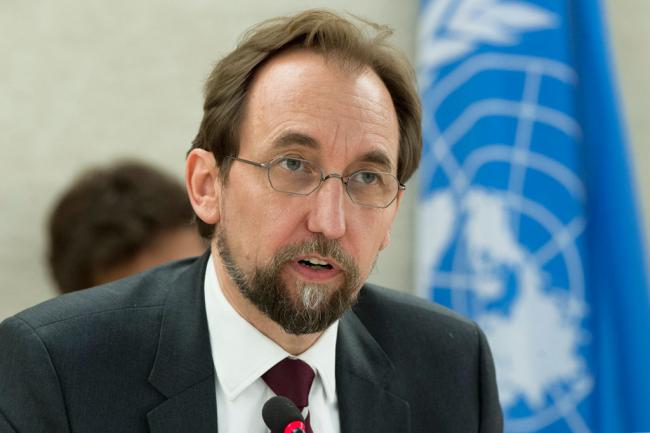 Amid wave of protests in Iran, UN rights chief urges impartial probe into all acts of violence

New York, Jan 4 (JEN) The top United Nations human rights official on Wednesday urged the Iranian authorities to handle the protests that have taken place around the country “with great care” so as not to further inflame violence and unrest.

“I am deeply disturbed by reports that more than 20 people, including an 11-year-old boy, have died and hundreds have been arrested during the recent wave of protests in Iran,” said UN High Commissioner for Human Rights, Zeid Ra'ad Al Hussein, in a separate statement that urged the authorities to investigate all deaths and serious injuries that have occurred so far.

He said the Iranian authorities must respect the rights of all demonstrators and detainees, including their right to life, and guarantee their safety and security. Calling for thorough, independent and impartial investigations of all acts of violence that have taken place, the UN rights chief said there must be a concerted effort by the authorities “to ensure that all security forces respond in a manner that is proportionate and strictly necessary, and fully in line with international law.”

Zeid stressed that Iranian citizens who take to the streets to express their discontent have a right to be heard, and that the issues they raise should be resolved through dialogue, with full respect for freedom of expression and the right to peaceful assembly.

“It is incumbent on the authorities that their actions do not provoke a downward spiral of violence, as occurred in 2009,” he warned. “The authorities must take all steps to ensure that this does not happen again.”

The High Commissioner urged the authorities to release from detention any protestors who have been arbitrarily deprived of their liberty, or penalized in any way, for expressing their views and protesting in a peaceful manner. “Peaceful protests must not be criminalized,” he said. “They are a legitimate part of the democratic process.”

Meanwhile, United Nations Secretary-General António Guterres on Wednesday deplored the loss of life in the wave of protests in Iran and said that further violence must be avoided.

A statement issued by a UN spokesperson said the Secretary-General is following with concern recent developments in the Islamic Republic of Iran.

“He urges respect for the rights to peaceful assembly and freedom of expression, and that any demonstrations take place in a peaceful manner. Further violence must be avoided,” the statement said.