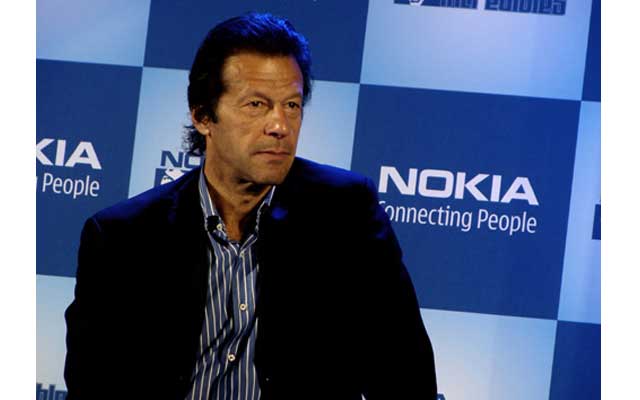 Speaking to reporters as quoted by Geo News, Khan said: "He [Trump] has been briefed by Pakistan’s enemies."

Khan said Trump do not know about the destruction caused in Pakistan due to 'war on terror'.

"Trump has no understanding of the war on terror and the destruction caused in Pakistan," Khan said.

He said: "Everyone knows the damages this has caused to our economy. 70,000 people have been killed in the war which had nothing to do with Pakistan.”

Attacking US President Donald Trump over his 'lie' tweet, Pakistan Foreign Minister Khawaja Asif said his nation has already refused to ‘do more’ for the United States.

“We have already told the US that we will not do more, so Trump’s ‘no more’ does not hold any importance,” Asif said in an exclusive interview with Geo News.

“Pakistan is ready to publicly provide every detail of the US aid that it has received,” Asif said in a strongly worded statement in response to Trump’s tweet that accuses Pakistan of providing safe havens to terrorists that the US is hunting in Afghanistan," he said.

Speaking on the claim made by Trump on the aid given to Pakistan by the US, he said: "The claim by Trump regarding the funds, if we account for it, they include reimbursements too for the services rendered by Pakistan."

Hours after US President's Donald Trump tweeted to accuse Pakistan of "lies and deceit", country's Foreign Office summoned United States ambassador David Hale to lodge its protest over the statement.

Soon after US President Donald Trump's strong message to Pakistan regarding funding, Islamabad on Monday said they will respond to the tweet by the former.

Trump gave a strong message to Pakistan when he said his nation 'foolishly' gave more than 33 billion dollars in aid for the past 15 years but the south Asian nation only provided safe heavens to terrorists.

He said Pakistan only gave 'lies and deceit' to the US in return to the aid.

"The NSS and the U.S. South Asia strategy are the cornerstones upon which our shared efforts to defeat terrorism and bring stability to Afghanistan are built.  Our partnership, which reflects a renewed U.S. commitment, will set the conditions to end the war and finally bringing peace to Afghanistan," read a statement issued by Afghanistan  President Ashraf Ghani's Office.

"We welcome that the strategy aims to strengthen peace and stability in the region especially through diplomatic means," read the statement.

"The National Unity Government is committed to the principle of mutual respect and cooperation among states in the region. We have always worked and shall continue to do so for a peaceful region with increased connectivity for the shared economic development of our people in this region. To this end, we will continue to work with our neighbors close and far in the region," it said.