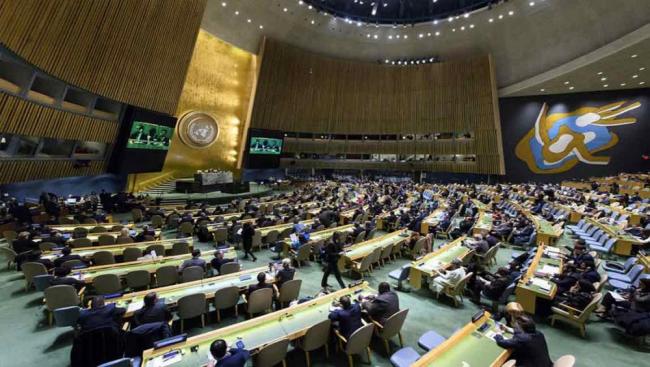 Jerusalem: India votes against US in UN

New York, Dec 22 (IBNS): India has voted against the US during the UN resolution that declared Donald Trump's decision to recognise Jerusalem as Israel's capital 'null and void'.

While India is among the 128 nations who voted against the US, Canada remained an absentee.

In response to queries regarding India's position on recognition of Jerusalem as capital of Israel by the US, the Official Spokesperson of India's External Affairs Ministry earlier this month had categorically stated that "India's position on Palestine is independent and consistent" and that "it is shaped by our views and interests, and not determined by any third country."

The Centre for Israel and Jewish Affairs (CIJA), advocacy agent of the Jewish Federations of Canada, tweeted, "The UN has adopted yet another anti-Israel resolution. Canada abstained. Thank you to the thousands and thousands of you who mobilized to call on the Canadian Government to stand with our friend and ally, Israel."

However, David Cape, the president of CIJA said though Canada did not take part in the vote, he would have liked to country to vote 'No', to send a clear message to the UN.

"That said, we would have preferred for Canada to have voted no in order to send a clear message that it rejects continued efforts to use the UN as a platform to attack, de-legitimize, vilify, and isolate Israel,” he said in a statement.

According to experts, Canada's move was made keeping in mind the North American Free Trade Agreement.

Trump had warned retaliation and Canada didn't want to rile him, feel commentators.

Before the vote began, Canada's Ambassador to the UN, Marc-Andre Blanchard, said, "We are disappointed that this resolution is one sided and does not advance prospects for peace to which we aspire, which is why we have abstained on today’s vote."

"Denying the connection between Jerusalem and the Jewish, Muslim and Christian faiths undermines the integrity of the site for all. We also reiterate the need to maintain the status quo at Jerusalem’s Holy sites,” he added.

Nikki Haley, US Ambassador to the UN said, "America will put our embassy in Jerusalem. That is what the American people want us to do and it is the right thing to do. No vote in the United Nations will make any difference on that. But this vote will make a difference on how Americans look at the UN, and on how we look at countries who disrespect us in the UN.”

Those who condemned Trump's decision on Jerusalem, said in a text that they expresses deep regret at recent decision made by the US.

"Any decisions and actions which purport to have altered the character, status or demographic composition of the Holy City of Jerusalem have no legal effect, are null and void and must be rescinded in compliance with relevant resolutions of the Security Council," the text read.