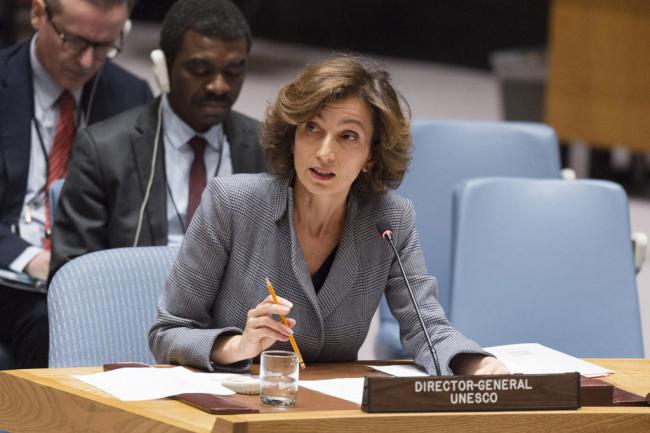 New York, Dec 1(Just Earth News): The United Nations Security Council on Wednesday focused its attention on global efforts to stop the traffic in and destruction of cultural property, with the head of the UN Educational, Scientific and Cultural Organization (UNESCO) laying out steps to protect cultural heritage and ensure that it can serve “as a source of belonging and peace for all people in times of conflict.”

In her briefing, newly-appointed UNESCO Director-General Audrey Azoulay, spotlighted the Secretary-General’s first report on the adoption by the Council of resolution 2347 (2017), which, among others, condemned destruction of cultural heritage and the looting of cultural property.

The landmark text also encouraged Member States to take preventive measures to safeguard cultural property in the context of armed conflict and “take appropriate steps to prevent and counter the illicit trade and trafficking in cultural property and other items of archaeological, historical, cultural, rare scientific, and religious importance originating from armed conflict areas, notably from terrorist groups.”

“The adoption of resolution 2347 (2017) represents a major breakthrough, and it testifies to a new awareness on the importance of culture to respond to conflicts, to prevent radicalization and fight violent extremism,” Azoulay told the Council, noting that she has been encouraged by Member States’ strong actions to implement it and other Council measures that together provide key aspects responding against terror and hatred.

While calling these “positive signals of deep change,” Azoulay added: “We need to do more.”

The UN cultural agency chief pointed out that of the 82 UNESCO World Heritage sites in the Arab region, 17 are on the List of World Heritage in Danger due to armed conflict.

“Over 100 cultural heritage sites across Iraq have been damaged,” she explained. “All six Syrian World Heritage sites have been severely affected, including Palmyra, and the fabled city of Aleppo, one of the oldest cities in the world, now reduced to rubble.”

Azoulay underscored that the UN response must step up efforts in several key areas that encompassed raising awareness of the resolution to strengthen its implementation by all Member States; facilitating data collection and information sharing, on trafficking routes, on damage assessment; and training peacekeepers in the protection of cultural heritage and integrate this issue into peacekeeping mandates and missions.

“In all this, I pledge on Thursday once again UNESCO’s determination to support Member States with the necessary tools and policy advice,” she concluded.

The goal is obvious – to undermine national identity and international law. Because heritage constitutes a source of identity and cohesion not only for particular communities but the world community as such Head of UN Counter-Terrorism Office Voronkov

For his part, Vladimir Voronkov, the Under-Secretary-General of the UN Counter-Terrorism Office, explained how terrorists, particularly in armed conflict situations, destroy not only lives and property but in targeting World Heritage Sites, they attack historical roots and cultural diversity.

“The goal is obvious – to undermine national identity and international law,” he said. “Because heritage constitutes a source of identity and cohesion not only for particular communities but the world community as such.”

He also linked the looting and illicit trafficking of cultural objects with the financing of terrorism, noting a number of resolutions and legal frameworks to address these crimes.

“Protecting our cultural heritage requires us to make every effort to implement this international legal and normative framework by strengthening international cooperation,” he asserted, suggesting the ‘All of UN’ approach as being key for an effective action.

He advocated for a stronger focus on investigation, cross-border cooperation and exchange of information, and for including private and public-sector partners to promote supply chain integrity and stop the illicit sale of cultural property.

“We can and must do more,” he stated.

Via video link from Vienna, Yury Fedotov, Executive Director of the UN Office on Drugs and Crime (UNODC) told the Council that countries must be helped detect stolen cultural property as part of the work to dismantle criminal networks.

“We must take the opportunity to further strengthen efforts to better safeguard vulnerable cultural property in various areas of conflict, as well as pursue longer-term measures to prevent terrorists and criminals profiting from trafficking,” he said.

He said there was a need to help countries detect stolen cultural property and improve international cooperation in the investigation, prosecution and adjudication of cases related to trafficking in cultural property.

“Only in this way can we protect precious cultural heritage from being lost forever,” he said.