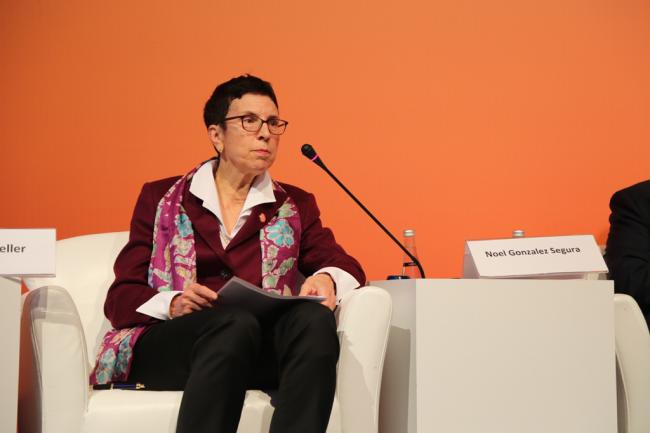 New York, Nov 30(Just Earth News):  With actors from the Global South increasingly among the frontline responders in fragile and protracted crises, fully leveraging the comparative advantage of South-South cooperation has the potential to have great humanitarian and development impact, a senior United National relief official said on Wednesday.

This message was delivered by Ursula Mueller, the Assistant Secretary-General for Humanitarian Affairs, to the final Leadership Roundtable of the Global South-South Development Expo 2017, which is under way in Antalya, Turkey.

“Southern actors respond as donors, hosts, operational and technical partners. They lend a crucial perspective for oftentimes they have faced similar challenges and know all too well that saving lives is just the first of many steps,” said Mueller as she co-chaired the discussion, under the theme ‘South-South Cooperation for Peace, Prosperity and Partnership: From Delivering Aid to Ending Need – Advancing the 2030 Agenda in Crisis Contexts.’

Mueller is participating in the 2017 Global Expo along with other senior UN officials, government ministers, national development agency directors, and civil society representatives, who have gathered to share innovative local solutions and push for scaling up concrete initiatives from the Global South to achieve the 2030 Agenda and its 17 Sustainable Development Goals (SDGs).

“South-South Cooperation is about saving livelihoods and sustainable solutions. It is about offering a helping hand to nations as equal partners. And it is about sharing experiences and lessons learned, knowledge and technical expertise,” noted Mueller, who is also the UN Deputy Emergency Relief Coordinator.

Nine UN agencies, with support from the World Bank, adopted the New Way of Working at the Istanbul World Humanitarian Summit in May 2016.

“The New Way of Working aims to transcend the divide between short-term humanitarian action and long-term development by fostering closer collaboration between humanitarian and development actors in fragile contexts – where conditions allow – so that we not only save lives, but also reduce need and build resilience,” emphasized Mueller.

Following her visit to Antalya, Mueller will go to Gaziantep, the largest and most populous city in southern Turkey, which has hosted hundreds of thousands of refugees who have fled from Syria.

“In Gaziantep, I will have opportunity to see close to the Syrian border how the humanitarian operation is working,” Mueller told UN News.

“There are still 13 million people in urgent need of humanitarian assistance inside Syria. We as humanitarians have to keep every possibility open for access to Syrians inside Syria. And we are grateful for the support by the Turkish Government to enable cross-border operations,” she said.

In 2016, Turkey was the world’s second largest humanitarian donor and most generous country in terms of ratio to its national income, spending $6 billion on humanitarian assistance. Turkey now hosts 3.2 million refugees from Syria.

Mueller met Turkish Foreign Minister Mevlüt Çavusoglu in Antalya on the first day of the Global Expo and said the meeting provided an opportunity to thank the Turkish Government and Turkish people […] I commend them for the services, the protection they provide for the Syrian refuges,” she stated.

On Tuesday, Mueller also visited Ankara, the capital city of Turkey, to meet with senior officials and Presidents of Turkish Red Crescent and AFAD, both of which have been playing an active role in providing humanitarian assistance in several the world’s humanitarian crises, including in Syria.