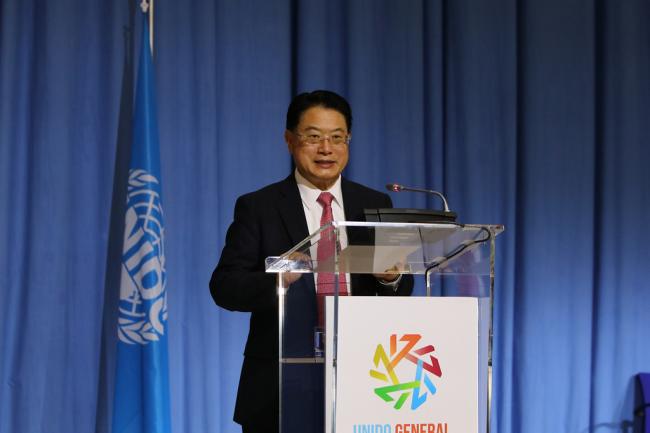 The Director General of the United Nations Industrial Development Organization’s (UNIDO) was reappointed for a second term on Monday as the 17th UNIDO General Conference opened in Vienna, Austria.

In his opening speech to the General Conference, Director General LI Yong said he was humbled by the trust placed in him to lead UNIDO for another four years, adding that he felt “a sense of profound responsibility.”

“The global community is still facing a number of unresolved and urgent challenges,” added Li. “Poverty, unemployment, and hunger remain the most persistent and daunting tasks for our world. Climate change, resource-depletion and environmental degradation, as well as the potential impact of the latest technological revolution, add another dimension,” he said.

Li stressed that “the only way to solve the challenges ahead of us is in partnership…in partnership with governments, UN sister agencies, the private sector, and civil society.”

“Your efforts can help support economic transformation in Africa and in other regions, and, as we combat climate change, your work can facilitate the transition to low-carbon growth,” underscored the Secretary-General.

The UN General Assembly president also congratulated Li, saying that he looked forward to working with him.

Speaking to the General Conference, President Miroslav LajÄák said: “Industrialization of the past may have earned a bad name. It may have made us think of pollution, wastewater or labour exploitation. But when industrialization is inclusive and sustainable, the results are positive.”

He pointed out that it leads to decent jobs and improved livelihoods; fosters youth employment; and enable resource preservation and environmental protection, “these outcomes propel us towards eliminating poverty and hunger and reducing inequalities,” he asserted.

Under the theme ‘Partnering for impact – achieving the Sustainable Development Goals,’ hundreds of participants, including UN senior representatives; Heads of State, ministers and other high-level government officials; and prominent leaders from the private sector, civil society and academia gathered to showcase UNIDO’s initiatives, achievements and partnerships.

As its highest policymaking organ, the General Conference assembles UNIDO’s member States and approves the programme and budgets for the forthcoming biennium.

It will also use interactive discussions to explore issues, such as gender, circular economy, and industry 4.0 and will spotlight UNIDO’s leading role in the Third Industrial Development Decade for Africa.

The Conference will offer a fully immersive experience for participants, including innovative formats for the events, integrated exhibitions and networking spaces.