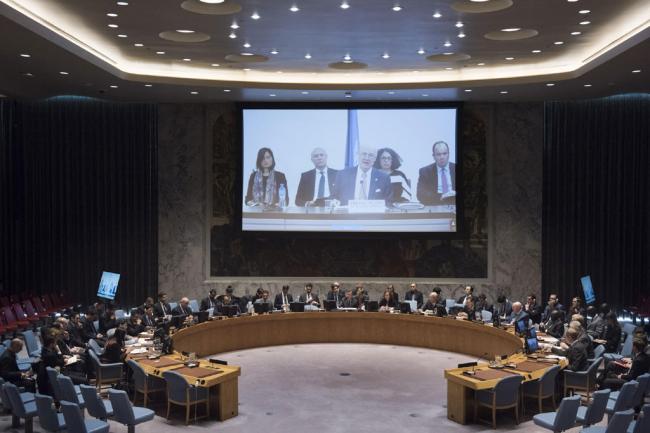 
New York, Nov 28(Just Earth News): Ahead of fresh intra-Syrian talks on Tuesday in Geneva, the United Nations mediator said on Monday that the crisis now has the potential to move towards “a genuine political process.”

As mandated by resolution 2254, the talks focus on governance, a schedule and process to draft a new constitution and the holding of elections as the basis for a Syrian-led, Syrian-owned process to end the conflict.

de Mistura said that in preparing for the eighth round of intra-Syrian talks, he called for “real” diplomacy, with his messages focused on several points, such as that the Government and a united opposition should engage in negotiations in Geneva without any preconditions and that all other initiatives should support this UN mediation process.

He noted that some important meetings have recently taken place in Viet Nam’s DaNang, Russia’s Sochi, and Saudi Arabia’s Riyadh that might help the Geneva process.

In Sochi, Syrian President Bashar al-Assad expressed, after meeting President Putin, his intention to “talk with anyone who is really interested in a political settlement.”

de Mistura, however, noted the Government has not yet confirmed its participation in the new round of the UN-facilitated Geneva talks.

In Riyadh, an expanded opposition conference was convened last week, with all three groups mentioned in resolution 2254 present. The Syrian Negotiations Commission formed in Riyadh is travelling to Geneva.

"Assuming that both parties arrive in Geneva, we will be looking to move them into beginning serious discussions and hopefully negotiations. Let me make one thing clear: we will not accept any preconditions from either party,” he said.

He also stressed that more than 200 civil society actors will be engaged in the UN-led political process in Geneva over the next weeks.

He said he is invited to participate in a preparatory meeting on Tuesday that France organized to bring together representatives of the five permanent members of the Security Council – China, France, Russia, United Kingdom and the United States – in Geneva.

As for a large gathering on Syria in the near future that Russia is planning, de Mistrua said it is premature for him to say anything about that initiative.

“I will continue to view this proposal and all other initiatives through the same prism: does it contribute to effective UN-led intra-Syrian negotiations in Geneva to implement resolution 2254,” he said.

Syria has been at war for the last six years. Half of its population have fled their homes, and, according to the UN’s relief wing, some 13 million people require humanitarian aid, including nearly three million trapped in besieged and hard-to-reach areas. Reconstruction will cost at least $250 billion.

“We see the emergence of international consensus, and we must begin to stitch the process into concrete results, enabling Syrians to determine their own future freely,” de Mistura said. “The united support of the international community, centred on this Council, will be vital if negotiations are to move forward in a concrete way.”