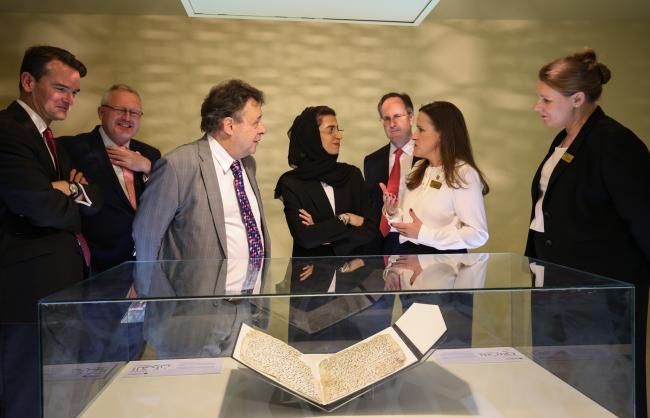 London, Nov 21 (IBNS): The University of Birmingham has opened the Abu Dhabi exhibition of the Birmingham Qur’an Manuscript.

A VIP opening was attended by Her Excellency Noura bint Mohammed Al Kaabi, Minister of Culture and Knowledge Development; Her Majesty’s Ambassador to the UAE Philip Parham; and Professor Robin Mason, Pro-Vice-Chancellor (International) University of Birmingham.

The major interactive digital exhibition continues its UAE tour telling the fascinating story of the Birmingham Qur’an to Abu Dhabi for the first time. It is located at  Umm Al Emarat Park, Abu Dhabi, and will take place until 29 November, before then moving to Atrium 6 at D3 in Dubai’s Design District from 19 April to 3 May 2018.

More than 14,000 people visited the exhibition earlier this month at the Sharjah International Book Fair (SIBF), where they explored the manuscript in digital form as well as viewing a detailed replica of the holy script.

One of the oldest surviving Islamic manuscripts, the Birmingham Qur’an is considered a global treasure. His Highness Sheikh Mohammed Bin Rashid Al Maktoum, Vice-President and Prime Minister of the UAE and Ruler of Dubai, viewed the exhibition in Sharjah after chairing an extraordinary Cabinet meeting at SIBF where the UK is Guest of Honour in celebration of the UK UAE 2017 Year of Creative Collaboration.

His Highness Sheikh Dr. Sultan Bin Mohammed Al Qassimi, The Ruler of Sharjah and Member of the UAE Supreme Council visited the exhibition with Her Excellency Noura Al Kaabi, Minister of Culture and Knowledge Development, as part of the opening of SIBF.

The Birmingham Qur’an exhibition forms a highlight of the UK/UAE 2017 Year of Creative Collaboration, held under the patronage of HH Sheikh Mohammed bin Zayed Al Nahyan, Crown Prince of Abu Dhabi and Deputy Supreme Commander of the UAE Armed Forces, and HRH The Prince of Wales.

The University of Birmingham is working closely with the British Council and the UAE Ministry of Culture and Knowledge Development as strategic partner to bring the unique exhibition to the UAE.

Our two countries share a belief in the importance of preserving, sharing and celebrating culture. I believe that bringing the Birmingham Qur’an exhibition to the UAE will play an important role in fostering mutual respect and understanding between our nations, cultures and faiths.”

“Following the success of this interactive digital exhibition in Sharjah, where it was visited by His Highness Sheikh Mohammed Bin Rashid Al Maktoum and thousands of people, we are honoured to offer the people of Abu Dhabi an opportunity to find out more about this extraordinary manuscript.”

"Together with the development of our campus in Dubai, this exhibition symbolizes the University’s deep commitment to working with partners in UAE to enhance academic opportunities and cultural understanding.”