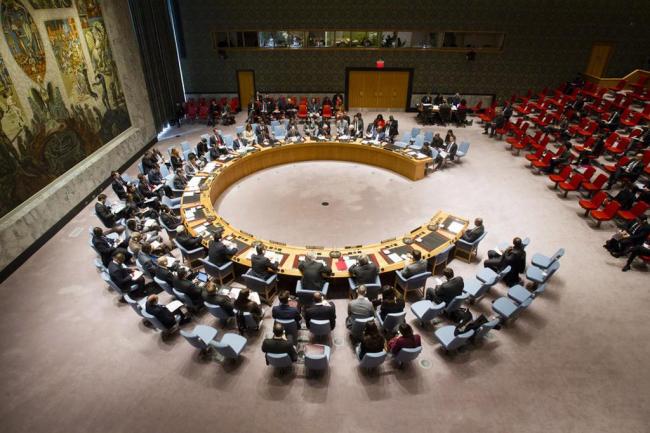 India Blooms News Service | | 14 Sep 2017, 04:12 am
#Security Council, # Guinea-Bissau, # resolution, # political crisis
New York, Sept 14(Just Earth News): Concerned by the political crisis in Guinea-Bissau, the United Nations Security Council on Wednesday urged political actors to â€œput the interests of [the people] above all other considerationâ€ and called on the country's leaders to engage in genuine dialogue, find common ground and implement the Conakry Agreement of 14 October 2016, including by appointing a consensus Prime Minister, as required by that accord.

In a statement read out by Tekeda Alemu, of Ethiopia, which holds the Council's presidency for September, the 15-nation body expressed deep concern about the unresolved political impasse in Guinea-Bissau, citing the inability of its leaders to reach a lasting and consensual solution, and the failure of both the National Assembly to hold plenary sessions since January 2016, and of four consecutive Governments to adopt a work programme and national budget.

Urging political actors to place the people's interests above all other considerations, the Council called upon national leaders — including the President, Speaker of Parliament and the heads of political parties — to abide by their commitments to restore political stability and refrain from rhetoric and acts that might undermine peace and national cohesion.

Implementation of the Conakry Agreement, the primary framework for a peaceful resolution of the political crisis, could help restore confidence and enable the international community to fulfil pledges made at the 2015 Brussels Conference, it stated.

The causes of instability in Guinea-Bissau remain unaddressed, the Council noted, stressing the need for the Government to continue to take concrete steps in such areas as security sector reform, reinforcing the judicial system's fight against corruption, improving public administration and providing basic services to the population.

Underlining the importance of legislative and presidential elections scheduled for 2018 and 2019, respectively, the Council stressed that implementation of the Conakry Agreement would bring Guinea-Bissau closer to political stability and bolster public confidence in advance of the voting.

The Council also welcomed the extension by an additional three months of the Economic Community of West African States (ECOWAS) Mission in Guinea-Bissau (ECOMIB), calling for its continued operation beyond that extension.